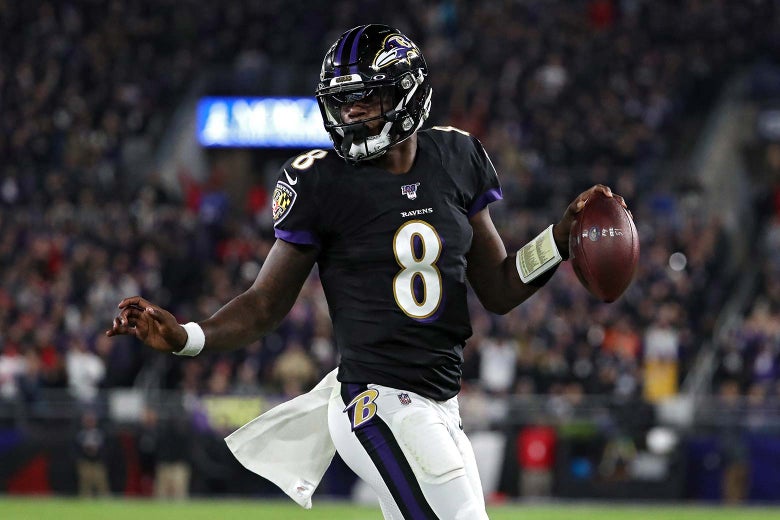 Before we get into this I want to quantify that I do not care who he is as a person, what he does for the community or the life obstacles that he faced to get where he is. If you want to talk about that, close this and take your ass over to the Lifetime Channel, where there’s a 50/50 chance they’ll have a murder mystery or a feel-good, coming-of-age tale on.

Lamar Jackson is a glitch in the Matrix. He is something that we have never seen before in a league that took 98 out of 100 years to figure out that you might want to coach around your player’s strengths instead of making them fit into what you feel like coaching.

He’s if you created a player in Madden and used all your attribute points on speed, agility, athleticism, throw power and had just enough points left to sprinkle in a twinkle of accuracy.

Lamar shattered all of Michael Vicks’s records (which would be a big deal if Michael Vick was a Hall Of Famer, but he isn’t). I want to clarify that I don’t think watching him isn’t fun, because it is. He is very entertaining, but is it scalable for long term success?

You can talk to me about his career year and his stats and how he is an MVP. But I would reply with this quote by Aqib Talib: “People that dry hump stats to make a point probably prefer reading sheet music to hearing the song.” I can give you a million guys that have great stats but in the end, never won a big game in their career. Steve Nash, Dan Marino, Randy Moss, Allen Iverson… I can honestly go on and on.

I know people are new to the Lamar Jackson “Nobody Cares, Work Harder” bandwagon. So let me tell you some stats that ESPN doesn’t tell you.

He has never won a big game his entire football career. You’d think he had to win a high school state title. The closest he got was the first round of the high school state playoffs when they played Central Miami and lost 49 to 6. (Granted it was a nationally ranked team he went up against.)

Some might say: “Well Football is the ultimate team game that loss isn’t on him.” He’s the quarterback and he touches the ball more than any of the other players on the field. If the team could only score 6 points, the majority is his fault. I didn’t make the rules, it just is what it is.

A trend of Lamar is individual awards. He has won a Heisman, Maxwell, and a Walter Camp award in college at Louisville. These are the most prestigious awards you can win on the offensive side of the ball. Looking deeper you would think he lied on his resume when you see he only won 1 out of 9 games against Top 25 teams at his time in Louisville. It’s just winning though. In the end people would much rather have Case Keenum’s college career over A.J McCarron’s because he had better stats. This isn’t a smear job. These facts are just etched in stone for historians to decide. I didn’t make them up and I certainly didn’t launch Lamar Jackson to a platform that his body of work can’t fill.

We can talk more about his NFL career but his rookie year was unimpressive, as well. He didn’t come in the top two for Rookie of the Year voting. He was outshined when it came to highlighting type plays with Saquon Barkley and couldn’t keep up with Baker Mayfield’s 2018 year. (Baker ended up getting in more commercials than Dak Prescott because of it.)

Lamar did make it to the playoffs in his rookie debut season and was rewarded by playing the Chargers, the first and only team he had played twice at the time. Unfortunately, they were ready for him, giving out a convincing loss to the Ravens in a game he struggled through.

This year he played with the lead in the majority of the games. In the games that he wasn’t in control and the Ravens needed him to throw them to victory, they lost. That theme continued over to the playoffs, where, once again, the Ravens needed him to be that MVP that people seem to clamor over. They needed for him to beat the Titans with his skill as a quarterback, not as a playmaker.

It isn’t rocket science. If Mark Ingram isn’t in and you cut off his tight-end safety blankets, he is going to be uncomfortable. Everyone can be a quarterback when you’re able to do what you like to do. Hell, look at Ryan Tannehill. Dude looked lost his entire career until Derrick Henry (aka his daddy) picked him off the turf and told him “everything is going to be alright I got you.” It was, once again, another big game in his career with the same result, and now the Ravens are forced to watch the rest of the playoffs from the couch.

It is proven on every level that just his legs and freakish talent are not enough to win games of significance. Sorry to anyone that feels different—as of right now I own you with facts and data. I don’t care if that’s not how you feel. You can get a box of tissues and tell your family therapist about it.

It doesn’t even make sense for Ravens fans to think that his style of play right now is Super Bowl worthy. You’ve won Super Bowls with another number 8—Trent Dilfer and Joe Flacco—who got less famous after he won Super Bowl MVP.

None of them had the tools that Lamar does and yet were able to win the big game when it mattered. So the answer isn’t for him to get even more flashy, it’s for him to understand the tone of the game more and to figure out when to use his legs and when to trust his offensive line.

I would say there is more to being a quarterback in the NFL than just being able to read a defense and throwing the ball where it needs to go, but when you look at who wins Super Bowls and who gets to wear a sports coat in Canton at that position, it’s the only thing that matters. Tom Brady couldn’t win the 6th-grade 40-yard dash, yet he is going to be remembered as the greatest player to ever play the position.

If you had to choose a QB under 25 in the AFC to invest your next 10 years in to win as many Super Bowls as possible would it be Lamar? Here are his peers:

When I look at his peers, I can’t say there are even three guys on the board who deserve to be in that conversation as of today.

Patrick Mahomes is the clear favorite, nobody can argue with it. The way he can extend plays and throw the ball on a line 50 yards…on his back foot…in the rain…while being tackled is just a wonder of the world. He will have his shot next Sunday against the 49ers.

Second is Deshaun Watson and that’s just because he is built differently. If Houston doesn’t learn from their divisional rival, the Colts, to invest in an offensive line, his career could be shorter. Even then, I still think he would find a way to win a Super Bowl on sheer will.

There’s a guy reading this right now saying “it’s not all about Super Bowls…” C’mon, man. Get out of here. It’s the only reason you play in the NFL besides the money, and the trade-off to money is fewer years on your life. I can’t argue with stupid and you’re clearly not equipped with the basic life skills to have a conversation; so go back to arguing how paper straws are basically the same as plastic. (They aren’t, by the way. Paper straws are the worst. Quit being that person.)

I hope Lamar can step up and be the player that everyone thinks he can be, but the reality is he has a lot farther to go before that happens.