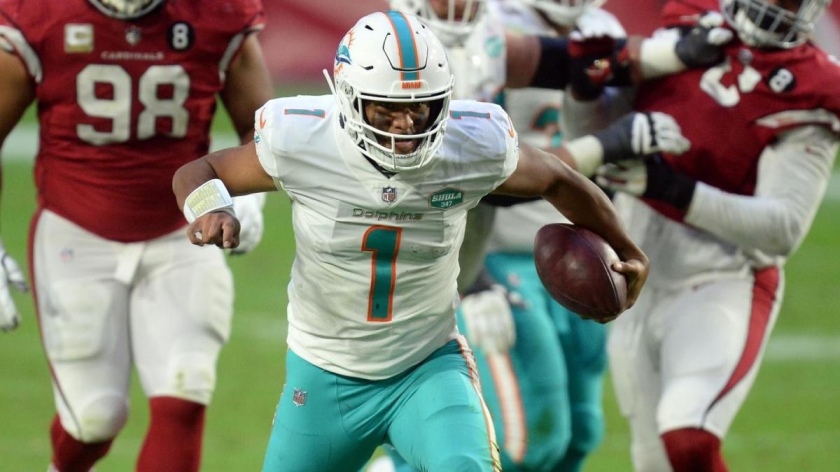 Hell yeah, the rookie makes my start of the week this week when he takes on the Los Angeles Chargers. He proved to be that he is every bit as lethal as he was made out to be. He gashed the Arizona Cardinals defense putting up over 20 points against them. He now goes to face the Chargers who are ranked 29th against opposing quarterbacks. Tua Time is go time.

Another rookie follows as Justin Herbert makes the list yet again. He and the Chargers will challenge the Miami Dolphins, and I expect this one to be a shootout like last weekend. Herbert has only posted under 20 points once. I see him continuing in stride against the Dolphins who just gave up over 40 fantasy points to Kyler Murray last weekend.

Wentz has not been the greatest quarterback this seasons as his stats have dipped this season, but for fantasy purposes he hasn’t been all that bad either. I like him this weekend against the Giants in which he scored over 30 points against them in his first outing. It won’t be that great again, but count him in for scoring big points in this one yet again.

Goff is coming off a pitiful performance against the Dolphins two weeks ago, but he has had time to prepare for his opponent on his bye week as he faces the Seattle Seahawks. Their defense is horrendous against the pass this season as they gave up over 40 points to Josh Allen last weekend, and have been graciously giving quarterbacks points every week. Count Goff in this week.

Lock is coming off his best performance of the season when he faced the Atlanta Falcons. I like his growth despite the losing as he’ll face the Las Vegas Raiders. The Raiders have constantly allowed quarterbacks to gain points on them as they are ranked 27th out of 32. Lock is a great add in for this week with some main quarterbacks on bye. Plus he’s probably available in a majority of leagues.

Newton pulled it together for a late win against the Jets, but he didn’t throw any touchdown passes. He still ran two in for scores, but he won’t be able to run much against the Ravens who have held quarterbacks in the past in check. Just ask Philip Rivers who got dominated last weekend.

Tannehill has dipped in the stats as of late, and that is starting to worry me as a fan. This week he has a difficult matchup with the Indianapolis Colts. They kept Lamar on his toes before the offense started making enough mistakes for him to score. I don’t see that happening this time. Tannehill should remain on the bench.

Burrow has been a shining light for the Cincinnati Bengals this season. His offensive game style threatens a lot of defenses. That won’t be the case for the Pittsburgh Steelers. Despite some setbacks, their defense has dominated and they should carve through the Bengals offensive line like butter.

Teddy fought hard to try to claim victory last weekend from the Kansas City Chiefs, but he came up just a tad bit short. This week he faces the Buccaneers once again, and I would not let the performance from the Bucs last weekend sway the way for this contest. Their defense is pretty good, and shouldn’t be trifled in this one.

Jones had a nice win over the Washington Football Team last weekend. However, he is not someone who I would throw in after that performance. Need I remind you that Jones had first game without a turnover last weekend. “Without” is the key word. Jones is a turnover machine, and this late in the season you cannot risk silly points like that.