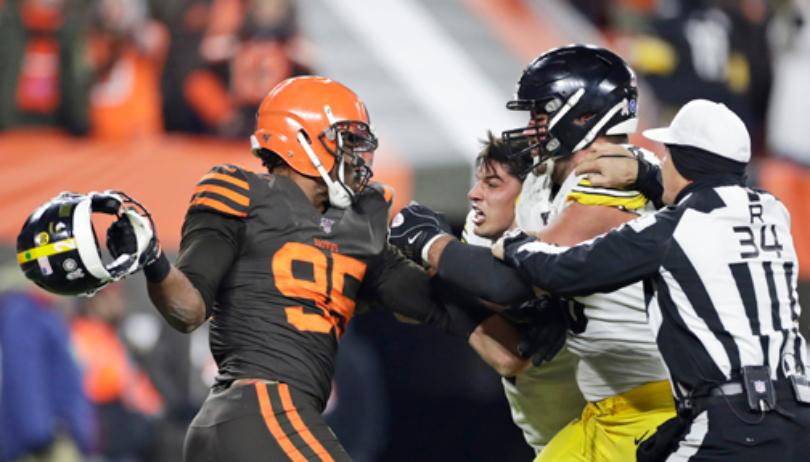 It was just last week that the Myles Garrett suspension was lifted. I wrote about it and how I applauded everyone for not freaking out about the length of the suspension. Take everything I said about not overreacting and throw that shit out the window. I feel that’s what Garrett is doing by trashing Mason Rudolph’s name in an act of cowardice.

I’m just disappointed we’re at the point where, in an interview with Mina Kimes, Garrett doubled-down on the fact that Mason Rudolph used a racial slur thus sparking the helmet incident.

To put it mildly, the racial slur allegations against Mason Rudolph are garbage. It’s disgusting and classless that this man Myles Garrett would go to such lengths to save his own reputation instead of taking accountability for his own actions. I will defend Mason Rudolph barring incriminating evidence that he said what he said. Until then, Myles Garrett should stop dragging this man’s name through the mud.

If Rudolph said what he said, then these racial slur allegations would have been addressed post game immediately after the incident happened. As a black man, my mom always taught me if someone ever used a racial slur towards me to swing first and ask questions later. She gave my brothers and I the green light because no one should ever use that kind of language. The same mentality holds true today and with a vast majority of black men I’m sure. Garrett obviously swung and on national TV. Instead of immediately addressing the situation, Myles Garrett waited until the appeals process to bring the allegations to light.

In a world where everything is magnified due to the lack of privacy, there is no way that something like this would go an entire week without coming up once.

From Rudolph, to the players on the field at the time of the incident in Maurkice Pouncey and David DeCastro, to the players in the Browns locker room, and recently today in Mike Tomlin. there is no evidence of Rudolph saying anything racist toward Myles Garrett. It’s incredible that someone would go to these crazy lengths to disparage one man’s reputation only to save his own. If Garrett should do anything, he should just let it go and stop creating this false narrative.