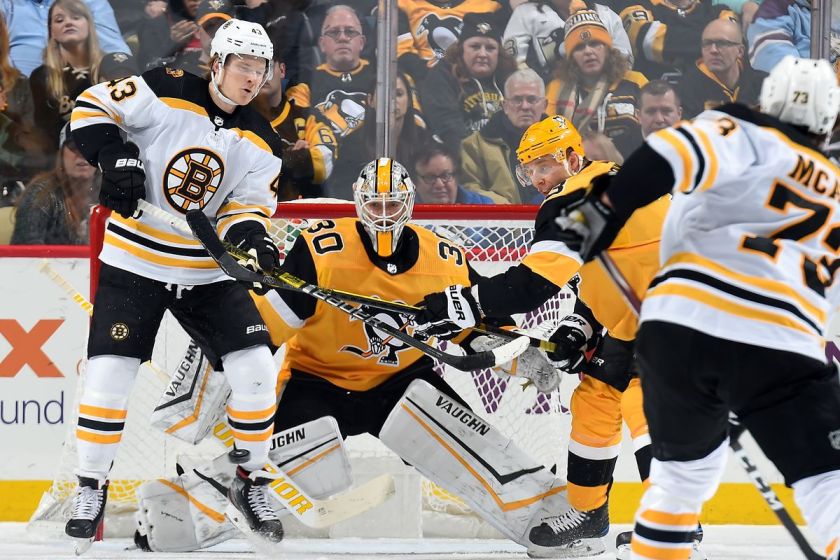 Yesterday, the Pittsburgh Penguins faced off against the Boston Bruins at PPG Paints Arena. The afternoon matinee was nationally televised on NBC, as the NHL game of the week. The game itself did not start on the right foot either.

The Penguins let up an early goal only eleven seconds into the game. Soon after, the Bruins scored twice, one of the goals being put into their own net by defenseman Jack Johnson.  By the end of the first period the score was 3-1, and fans were not happy. Goalie Matt Murray finished the first period with 11 saves on 14 shots, which is not a very great stat for an NHL goaltender.

Most fans, myself included, thought head coach Mike Sullivan would pull the plug on Murray, and replace him with Tristan Jarry after the third goal. However, Sullivan stuck with the two time Stanley Cup winning goaltender, and what a great decision that was. The Penguins fought back by scoring four unanswered goals, which led to the 4-3 victory. One of the best comebacks of the season for sure, but does the Pittsburgh media focus on that?

No, not at all. Instead they’re focusing on the boo’s and Bronx Cheer goaltender Matt Murray received in the first period.

I personally don’t boo my home team, even if they aren’t playing as well as you want them to. However that is not always the case with other Penguins fans. Yesterday’s game proved that fans can turn on their home team at any moment. But hey, fans live for excitement and success. If the team is struggling, and in this case goes down 1-0 11 seconds into the game you have to be ready for frustrations to come out.

The boo’s and Bronx Cheer (mocking Murray for making a save), are not ideal for home teams fans, but I can see why they occurred. The fans frustrations were very high, and they believed the team wasn’t playing up to their expectations. So what better way to let them know they aren’t happy with their performance than booing them?

The Pittsburgh media has taken the boo’s a little too far though. Most media have expressed their opinions, and have called fans out for being disrespectful and what not. I think the main reason they are so focused on this half of the story is because the game was nationally televised, and they don’t want Penguins fans to have a negative reputation. However, instead of focusing on the fans reactions, I believe the media should focus on the game itself. They need to stop trying to turn the fans against each other and the player, and start focusing on the team itself. The comeback victory was one of the best of the season, maybe the best in years.

Most times team’s who go down 3-0 after the first period give up on the game completely. However this Penguins team is different. Not only did they battle back to victory, but they did it without replacing their goaltender. Matt Murray proved himself out there last night. He did not let the negativity in the arena effect his next two periods. He was able to battle back and focus on getting his team the win, as well as not letting up any more goals after the first period. In fact, Murray finished the game with 34 saves on 37 shots. Sullivan’s decision to keep Murray in the net, was HUGE. It showed he still believes in his goaltender, even though he struggled early on this season. In Murray’s last seven games he has posted a 6-1 record, not too shabby if you ask me.

The Penguins look to close their first half of the season, tomorrow night at Philadelphia. It’ll be interesting to see who gets the start in between the pipes!