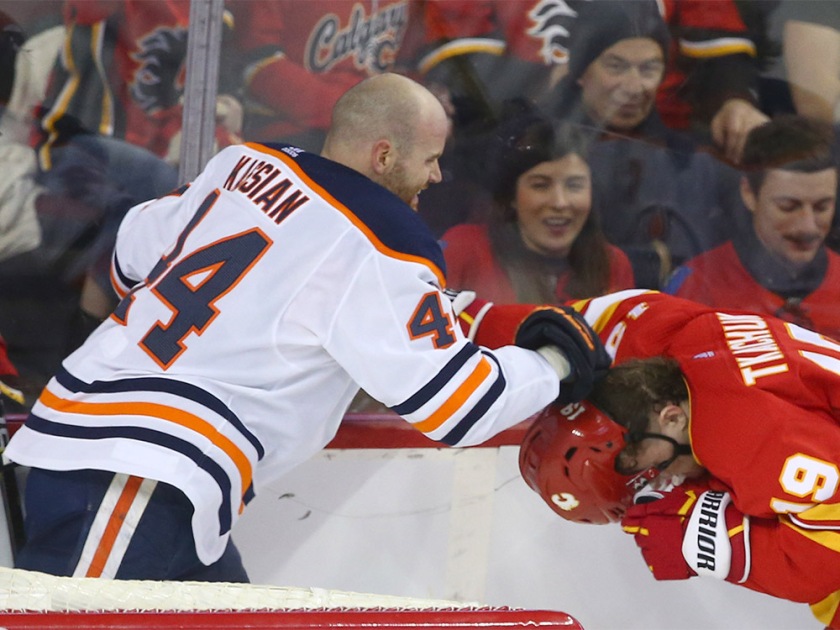 After having a wonderful debate within the TFTB team, I’m writing a rebuttal to what Elsass put out. If you want to see what he said, then drop by his article and give it a read.

My take on the situation is vastly different. Don’t get me wrong, I’m not going to sit here and say Kassian is a talented star hockey player, the guy is exactly what he’s being called: a goon. I’ll never deny that, he doesn’t put up numbers, he’s an enforcer. His job is essentially to just dish out punishment.

That being said, he was blindsided twice by Tkachuk. The hits Tkachuk made were legal, but that doesn’t change the fact that they were relatively dirty. After the first hit, Kassian went for an even man on man fight. Tkachuk declined. That should have been the end of it.

Then Tkachuk decided to blindside Kassian and run him again.

How stupid can you actually be? You blindside an enforcer and decline a fight. You’re pushing your luck to the brink. You then proceed to run him again, you’re literally asking for your ass to be beat. Quite frankly, you deserve it, if not for the questionable hits, for being a downright idiot.

Elsass decided to make the comparison of saying if Tkachuk hits McDavid like that, then fine go ahead and jump him.

No, I don’t care who you are, nor who you hit. If you blindside someone twice, you deserve to get your due punishment. Case closed. Did Kassian go a bit too far? Yeah, but honestly I don’t blame him. Then you have Tkachuk saying “if he doesn’t want to get hit, then stay off the tracks”………HAHAHAHA. Really? I have ZERO doubts in my mind that he wouldn’t have the BALLS to say that to Kassian’s face. He’s all talk when he’s not within distance to get what he deserves. The same could go for him, if he doesn’t want his shit pushed in after two dirty, don’t make them.

Also, this idea that Kassian got rocked because he had his head down and that he’s incapable of playing in the NHL because he can’t make plays with his head up is ridiculous.

I’ve seen superstars battle for the puck in the corner with their head down. Crosby does it, Malkin does it, Letang does it. All these hometown heroes of ours do it at some point or another. Just because you make a play with your head down doesn’t make you any less deserving of playing in the league.

This idea that Kassian can’t fight back because he is an enforcer is literal trash. Just because you’re an enforcer doesn’t mean when you get hit, you just keel over and die. Forget that. He did what he should have done. Got hit, tried to have a legitimate fight, didn’t do anything when he was denied that. Got rocked again, proceeded to stand up for himself. As he should, 10 out of 10 times.

I think Kassian deserves a suspension, but only a handful of games AT MOST. I don’t think Tkachuk really deserves any suspension or disciplinary action like Kassian should. That being said, I wouldn’t be surprised if Tkachuk has a bulleye painted on his back now. He played and acted like a little punk, and he got what he deserved.