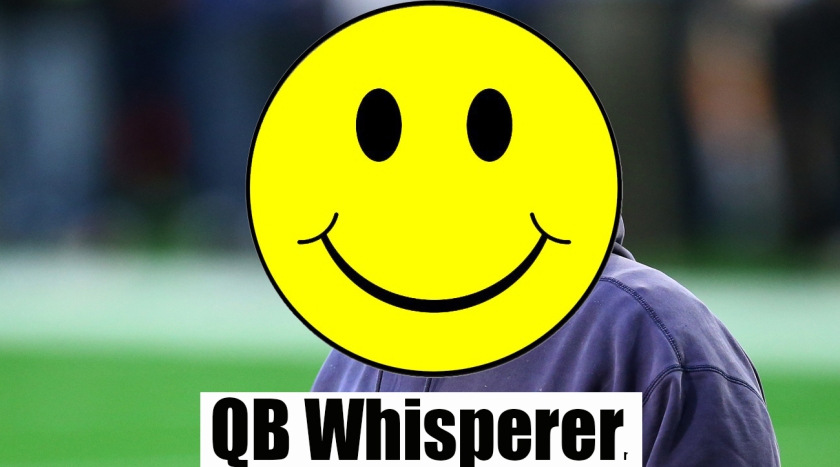 Hey Guys, Blogdini here. You don’t know me very well right now but you will, I promise you that.

I just wanted to drop by this morning to give you some news. There was a big debate swirling around the Bench over Labor Day Weekend. No, it wasn’t about Dre’s White Claw rankings and it wasn’t about Austin’s Top 10 Songs of the Summer, because we all know that none of us agreed with either of those.

It was about the hot topic of quarterback whisperer’s in the NFL. So, I’m here to tell you who the greatest QB whisperer of all-time is and I guarantee you he isn’t even on your radar.

Now there were a lot of names thrown around throughout this discussion. I actually was the one that got it going when I mentioned Jalen Hurts and how he threw for 332 yards, ran for 176 yards and found the end zone six times against Houston in his first start under Lincoln Riley.

Which brings us to our first candidate.

Now, I’m not saying either quarterback isn’t worth the praise. They are both good, although I think Baker will fair out better on the NFL level due to his attitude, his talent, and then there’s the talent that surrounds him.

I mean I’m pretty sure Daniel Jones or Eli Manning could win with the amount of talent that Cleveland has. I mean camon, look at these two.

Kyler has talent but he doesn’t have much surrounding him and just because he’s athletic doesn’t mean it will work out.

I think you can chalk up Lincoln Riley’s “QB Whisperer” praise to overall quarterback talent and the talent surrounding the quarterback.

Which brings us to our second candidate and current coach of the Arizona Cardinals,

Yea that guy. He coached Johnny Football at Texas A&M as an offensive coordinator. He was the Head Coach at Texas Tech between 2013-2018 and coached Patrick Mahomes before the 2018 MVP blew up in the NFL. Here’s how some of his teams panned out.

Honestly, I don’t think there’s enough evidence to prove that Kingsbury is a QB Whisperer. His offenses put up numbers. But offensive life in the Big 12 is easy living and defenses are torn up on a daily basis. I mean look at those defensive ranks from his time with the Red Raiders. The numbers speak for themselves.

There were a lot of other names that were tossed around. Bruce Arinas was one and I think his name deserves consideration. After his work with Jared Goff this past year, I think Sean McVay earned a little consideration. But there’s one name that should stand above the rest.

Now his resume speaks for itself. He took a guy by the name of Tom Brady, a 6th round pick out of Michigan in the 2000 NFL Draft, and turned him into a 6x Super Bowl Champion, a 4x Super Bowl MVP, a 3x NFL MVP, a 14x Pro Bowler and now, he’s probably the GOAT.

Not only did he turn Tom Brady into all of that. But he turned Jimmy Garoppolo into a 137.5-million-dollar man based off of a few starts in the NFL. He also did the same with Jacoby Brissett. Some may say it’s his system. But it’s definitely the coach and Bill Belichik is the ultimate QB Whisperer.