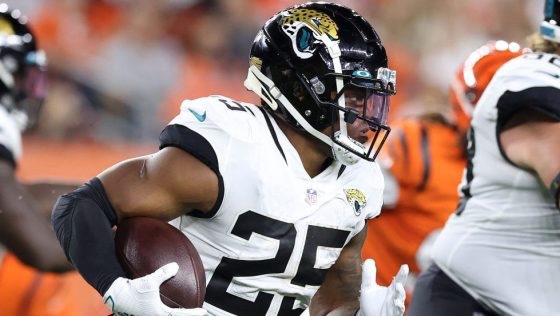 Well I am happy all of you enjoyed the starts and sits for running backs this past weekend. Cordarrelle Patterson swept the Jets under the rug, and Miles Sanders bit the dust just as I expected. With so many injuries and teams on bye, I am betting you are frustrated on who to choose. Well let’s fix that right now shall we?

Robinson has finally found his footing in the Urban Meyer’s heart. The kid put on a show against the Titans rushing for almost 150 yards and a touchdown. Now he gets a nice juicy matchup with a team that just can’t seem to stop the run in the Miami Dolphins. James Robinson should feast here given how bad this rush defense is. No questions about it people. Start him and sit back and enjoy your life.

Fournette made the best of an opportunity last week scoring over 20 fantasy points against the Miami Dolphins. He now faces the Eagles who gave some hiccups last week except to one person; Chuba Hubbard. Fournette can run and catch out of the backfield and has clearly demonstrated why he is the number one back for Tampa Bay. He should have a great day this Thursday night!

Henderson had a good stat line despite being pulled from the game a little bit. If that wasn’t the case, he’d probably have two rushing touchdowns instead of one. Regardless, he and the Rams will face the depleted Giants this week. Their rush defense is the 28th ranked in the NFL. Henderson should have no trouble plowing through this weak defense on to score some major points.

He’s coming off the sit list for this week because he scored a boat load of points given the game script. He’ll get a chance to prove fantasy owners right when and the Dolphins face the Jacksonville Jaguars this week. Their defense in terms of rush defense is 26th in the NFL. The script could follow Gaskin’s way again depending on the situation so if you are willing to bank on it like I am you should start him.

We saw some flashed from Williams in the Steelers game that make me feel like he is ready to take the lead here. It helps that Melvin Gordon is a bit hobbled from an injury. Given this, the Broncos could strengthen Williams’s workload. They better because they face the Las Vegas Raiders. Their rush defense is near the bottom tier. Even Damien Williams was able to score on them last weekend. Trust me, this might be Javonte’s time.

I’ll continue to do it as long as they misuse him in this offense. Miles Sanders is a good running back, but isn’t getting the most opportunities because of play calling and game script. Hurts has completely taken over the run department, and Kenneth Gainwell is still there eating up carries. They play the Bucs this week so I’d stay far away from Sanders as the Bucs specialize in run defense. Just not a good one given the situation and matchup.

I get that he is dealing with a neck issue so if he is unable to go apply to Alex Collins instead. Carson hasn’t been spectacular this season, and the Seahawks might want to run the ball a lot given Geno is at quarterback. It’s not a good idea. The Steelers can give up big runs from time to time, but their defense is still elite at stopping running backs. It should be n different here even if it is Chris Carson. A hard fade for me in fact.

Conner has been doing quite well in Arizona being the compliment to Chase Edmonds. However, this matchup does not favor him, and honestly would probably better favor Chase Edmonds. The Browns can stop the run well so I’d assume that the Cardinals might call on Edmonds more to handle the business I don’t know. Like I said I like the kid, and am glad he’s doing well as a Steelers fan, but this shouldn’t be his day.

Harris is questionable so keep that in mind, but either this game doesn’t favor him whatsoever against the Cowboys. They are fairly good at stopping the run, and I would honestly see Bolden being a bigger part of this offense mimicking that James White role. Harris is good just not in certain situations, and this is one of them. Sit him this week against Dallas.

I’m not really confident in starting Booker this week because of Saquon’s injury. He’s a decent backup, but he is not going to get you the points that Saquon can. Plus, all of the weapons on the Giants are injured which means the Rams defense will likely box in Booker and make Glennin or Jones (if he plays) to throw the ball. It’s smart for the Rams, and it;s not smart for you to start Booker this week people no matter who many of you put in a waiver request for him.