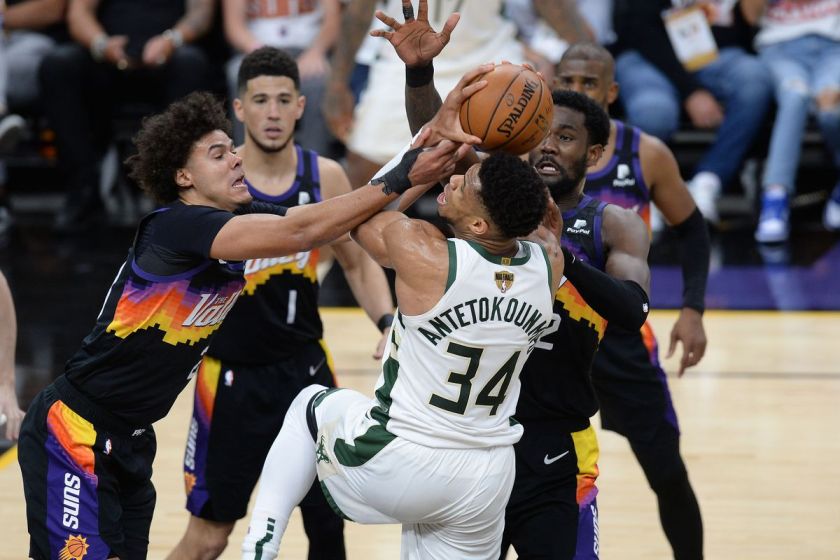 Let us start with this.

Am I worried? Nope! If you read my article from game 1 you would know I predicted that they would lose game 2. But what I was hoping to see was progress. Which I think we saw.

First Giannis, the man did not look like he had a rumored ACL tear. Well, accept when he was on the ground. Luckily basketball is played standing up.

Damn thats awesome. Also, he shot 61% from the charity stripe. Obviously had a stupid 42 points and was dominant. He just needed a little more help.

But I think thats coming. Because of things like this.

After game one I begged them to go to the paint, they did that. Now they need to do that exclusively in game 3. Which I think they will.

Game 2 was much closer.

The Suns had to put in a team performance to win this game. All of their starting five were in double digits. But that’s what we want. We want them to have to play that way. If we let it be run and gun the Suns will kill us. Devin Booker and Chris Paul are too damn good. But, if we control the game and force the Suns to play system basketball we can win.

Check out the underlying stats. The Bucks weren’t just good they were dominant.

Again the Bucks win that category clicking at 36% the Suns at 28.2%. The bucks are at their best when they are winning in the paint on both sides of the floor.

You guessed it this one goes to the Bucks. 16% of the time they were taking an extra shot. On the flip side they were doing a great job not fouling the Suns. The Bucks did such a great job that the Suns didn’t get their first free throw of the game until late in the 2nd quarter.

But the stat they fall short on is Field Goal percentage. Shooting at 500 isn’t going to win the game. But keep this in mind, even in winning efforts the Bucks rarely shoot over 500. It’s their ability to keep the other team from shooting 500 that gives them the edge.

So all in all everything is right on track. The Bucks have two days off and a trip home. They will win game 3 and 4 in Milwaukee then it’s a best of three series. Which leaves me with my last point, it simple.