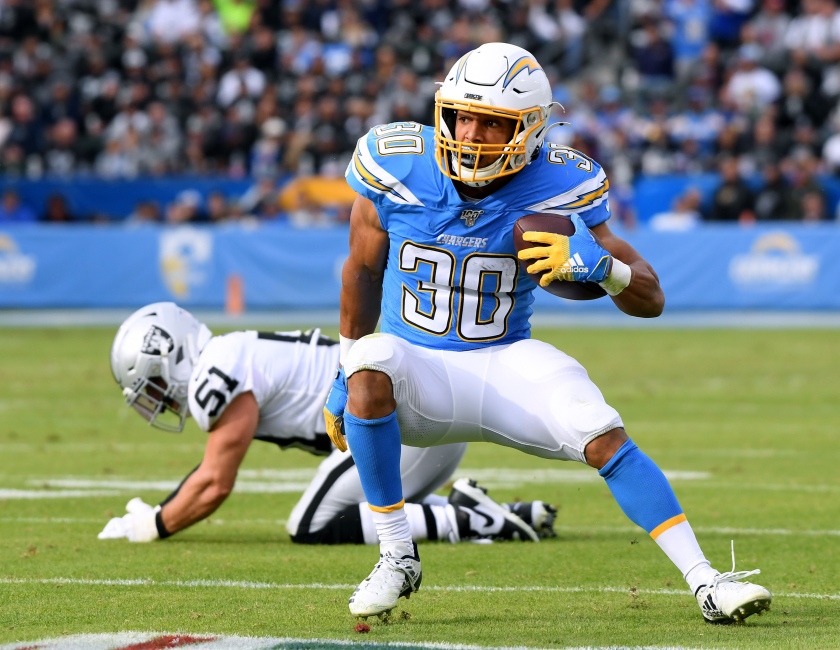 Ekeler was the shining point in the Chargers offense as the team couldn’t get anything going. I shouldn’t have to tell you to start him at this point, but after last week’s game, people are asking me if they should start him still. Does a bear shit in the woods? Does Harry Potter have a scar? Does soccer normally end in ties? These simple questions can be categorized with this Austin Ekeler question. Despite the matchup you start him.

Montgomery is certainly coming along in his sophomore year running the ball. He has two back-back weeks of getting over 20 fantasy points. He is a big start this weekend when he and the Bears take on the Texans who are ranked next to last in stopping the run game. Start with confidence.

Depending on if he plays or not, Adrian Peterson would fall into this category, but if Swift is good to go then you absolutely start him against the Packers would cannot stop the run to save their life. They are ranked 30th in the NFL. Get him in your lineups!

Drake’s fantasy value has gone up in recent weeks due to the shoulder injury of Kyler Murray affecting his running game or lack there of. Drake has scored double digit points in four consecutive weeks. He also goes up against a Giants team that despite having a good defense has a kryptonite for stopping the run ranking 23rd in the NFL. Give me a RB2 spot, or if you are feeling frisky throw him in the flex.

Gordon rushed for over 100 yards last weekend against the Kansas City Chiefs. He should be a great option even with Phillip Lindsay still taking carries when he and the Broncos take on the Carolina Panthers this weekend. They are ranked 26th so Gordon or Lindsay or both should have a great day!

Miles Sanders was the start of the week last weekend, and man did he blow that hard against the Packers. It will remain to be seen how the Eagles use him with Jalen Hurts being at quarterback, but the matchup is not great. The Saints are the top team at defending the run. Sit him. Sit him by god.

Edwards-Helaire’s fantasy value has been trending down from his epic debut against the Texans, but last weekend he was given the go-ahead to play, and he didn’t touch the ball once as a non COVID-related illness kept him on the sidelines. A harsh choice as some teams might have depended on his success. He faces a Dolphins team this weekend, and knowing this team, they will pass before they run 99% of the time.

Gurley registered a big three points I believe in his matchup against the Saints last weekend. The Falcons have been a pass first option basically only using Gurley for goal line work. It will be hard to trust Gurley despite the great matchup as Brian Hill and Ito Smith have been getting quite the carries in recent weeks.

Johnson’s comeback was supposed to be better last week, but he got bottled up a lot against the Colts’ rushing defense. He faces another big task when he and the Texans face the Chicago Bears; a team that is ranked in the top ten at defending the run.

Harris has been the clear cut running back in New England despite the activation of Sony Michel from IR. Their entire roster and game script depends on how well they can run the ball. It seems like a daunting task, and it should be. The Rams have been disabling running backs all season ranking 7th in the NFL. Temper expectations with this one here.