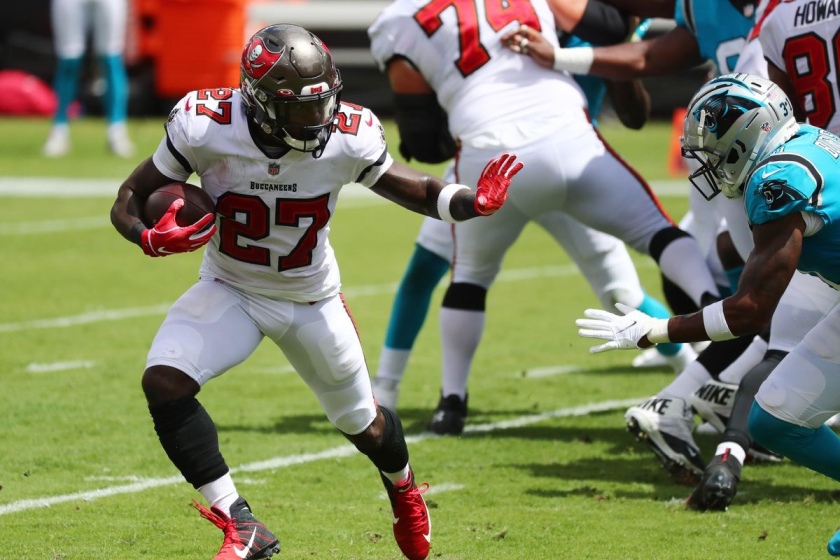 Jones went on a rampage last weekend against Green Bay with over 29 fantasy points. This weekend should be another big matchup for him as the Raiders are next to last with Green Bay being in last. Jones should have a field day with this poor rushing defense.

Gurley wasn’t much of a factor last weekend against the Vikings, but when he is against a bottom tier rushing defense in the Detroit Lions. If they stick with the game and don’t fall behind, Gurley should find an important role in the run game. The Lions have allowed seven total touchdowns and the sixth most points to backs this season. Get him in your lineup.

Johnson had another rushing touchdown last weekend against the Tennessee Titans, and this week he gets a much nicer challenge in the form of the Green Bay Packers. Their rush defense is dead last in the NFL, and we saw that last weekend against the Buccaneers. In fact, Green Bay has allowed four 19 point performances out of five games this season.

Singletary didn’t get much work in when the Bills started to fall behind hard to the Chiefs. However, he gets a much easier matchup this week when the Bills take on the struggling New York Jets. He scored double digit points against them their first go around, so whose to say he can’t do it again.

Swift came through for the Lions this week with an amazing fantasy performance of over 30 points. I believe Swift is the proper back to go with in the future, and his pass catch ability proves to be a great use to Matthew Stafford in tight situations. He should do quite well against the Falcons ugly defense.

Bell will be useful to your fantasy lineups and to the Chiefs. However, to put him in your lineups this early is just foolish. We don’t know how Bell and Clyde will split the carries, so it is best to leave him on the sidelines for now because I know a lot of you are going to try to flex him this weekend.

Montgomery is doing better than I expected this year as the running back for the Chicago Bears. Granted with Cohen out for the year, Montgomery has more snaps to work with, and he has a better understanding of the offense as well. However, I am not feeling confident this week as he goes against the Rams with Aaron Donald on the other side.

Henderson has taken advantage of injuries and play scheme in order to secure a good role as the main running back of the Los Angeles Rams. However, having him go against the Chicago Bears does not bold well for fantasy owners. Henderson is normally a RB2, but with a match with the Bears makes him a very low-end flex option this week.

McKinnon is a nice option in stats this week since Mostert will be out of action, but a match against the New England Patriots sounds anything but promising. This entire season alone, New England has only allowed two rushing touchdowns and the fourth fewest points to enemy backs.

Freeman has established himself as the Giants main running back taking over for Saquon Barkley. The only problem is that the Giants get down by so many points that Freeman can’t do his thing because of a change in game script. Hopefully he can do good things this Thursday, but it is not looking good against the Eagles.