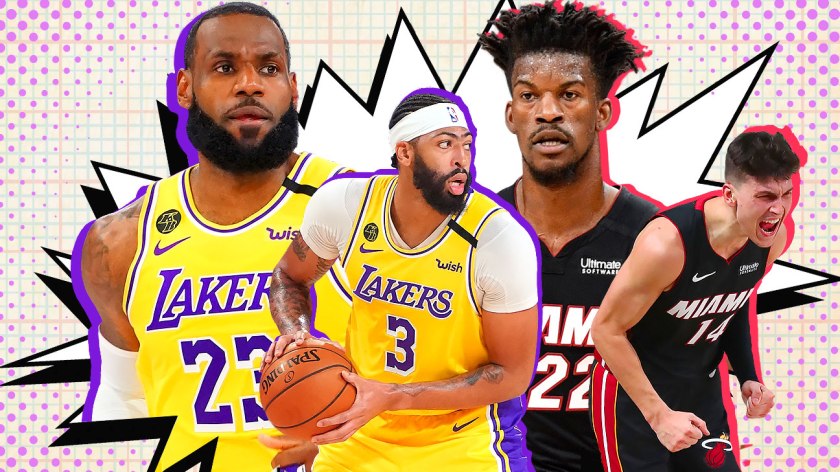 It’s finally time for the NBA Finals as Game 1 is set for tonight at 9 pm. The road to get here wasn’t necessarily ideal BUT here we are.

The road for both the Los Angeles Lakers and the Miami Heat also was the one that was to be believed less traveled. But no doubt, I believe this is the best matchup possible. The Lakers are the powerhouse led by Lebron James and Anthony Davis, while the Heat are lovable, gritty underdogs with emerging stars in Bam Adebayo and Tyler Herro. Of course, they’re lead by superstar Jimmy Butler but even he doesn’t come close to the talent level of AD or King James. Let’s take a look at the teams, what’s on the line, and pick a winner.

No doubt, it is all about legacy for Lebron James as he looks for his 4th title. It will be his 3rd with a different team which is something to behold on that pedestal. People can get mad about him starting his Larry OB chase in Miami all of them years ago. The bottom line is that we’re way past it. In fact, at 35 years of age, he should not be doing what he’s doing. He’s damn near averaging a triple-double in the bubble.

There’s so much at stake for his chase to supplant Michael Jordan as the greatest ever. I know what some will say if he wins here “He didn’t even have to play the Clippers.”

They blew a 3-1 lead so miss me with that nonsense. As far as Jordan goes, I really don’t know if he’ll pass him on the all-time list, but a 4th title goes such a long way in doing so.

AD also has a lot at stake here. Lebron should eventually decline (though he’s defying Father Time right now) so AD is going to be looked at to carry this franchise into the future. He is a FA at the end of the year but it’s now hard to see him leaving for any other team. He wanted to be a Laker as the plan was set into motion the second Lebron signed the dotted line in 2019. The bottom line is when you’re dawning that purple and gold you’re immediately defined by rings. This is the farthest he’s ever been so for him to get one here goes a long way in starting to cement his place in NBA history.

As we’re in weird times, we cannot forget about how the rest of the team is trying to cement their legacy here in the bubble. The bubble has been nothing short of spectacular in terms of all-around hoops. Watching these Lakers grow has been awesome.

The GAWD Alex Caruso has become a fan favorite. The last finals JR Smith was in he tossed away Game 1 vs the Warriors. A win here sort of puts that debacle in the rearview. Dwight Howard is a HOFer so a ring definitely cements that. People forget he was once the most dominant big in the league. Oh and Rajon Rondo could become the first player to win rings with both the Celtics and the Lakers. There’s so much at stake with the stars, but it’s going to come down to how these role players can respond because the Miami Heat are deep as hell.

With the Lakers, it’s all about legacy undoubtedly as they have the biggest stars on the court. There is some legacy here at stake too for this Heat team. A team that has the legendary Pat Riley at the helm in the front office. He really has put a great team together that will make noise in the Eastern Conference for years to come. I honestly don’t think he’s gotten enough credit for this roster construction so here’s your appreciation big guy! If they win, he gets another ring to add to his legendary legacy.

Erik Spoelstra is a no doubt a top 3 coach in the NBA. The journey started with a somewhat predictable sweep of the Pacers, which was impressive. It’s been so long that I feel we forget that TJ Warren was lighting up the bubble but looked invisible in that series.

This run truly started by knocking off the top dog Milwaukee Bucks in 5 games. His game plan for containing MVP/DPOY Giannis Antetokounmpo early on was masterful. It’s a shame that he got hurt but that’s sports.

Out-coaching Brad Stevens of the Celtics wasn’t an easy task either. The road should be looked at as gritty as their games were constant bar fights. But that’s the identity of this Spoelstra coached Heat squad. A win here I think makes him the second best coach of this generation behind Pop.

Jimmy Butler even has some legacy at stake. His story of getting to the NBA is one of a kind. If you don’t know it, you should look it up as I can’t do his journey the proper justice it deserves. Jimmy Buckets is one of the rare players of today’s NBA who embraces the Mamba Mentality. He’s the epitome of this team in terms of his image showing up to workouts at 4 am and being the last to leave. For him to get a ring here during the Lebron James era, he’d be in rare company and especially if he wins finals MVP. He would have done it being considered the only superstar on this team and looked in a light like we sort of look at Dirk Nowitzki.

Outside of AD, I give the Heat the edge in supporting cast. They have the better shooters and the deeper roster in terms of talent. I know they’re all young for the most part in Tyler Herro, Bam Adebayo, Duncan Robinson, and Kendrick Nunn all being on rookie deals.

They haven’t really sprinkled in former finals MVP Andre Iguodala but this could be the time they unleash him. His experience with the Warriors could prove dividends here in this series. I love this Heat team as I stated before. What’s not to like about them?

The bottom line though is the Lakers will win this series in 6 games. There’s just too much on the line for Lebron and the Lakers. We also all know that Kobe will be looking down on this game as they’ve been playing for him all year. This Lakers team has been waiting for this moment since tip-off this year. I can’t imagine them folding at the finish line now. Lakers in 6 and Lebron James gets the finals MVP thus concluding the most intriguing and bizarre NBA season in history.