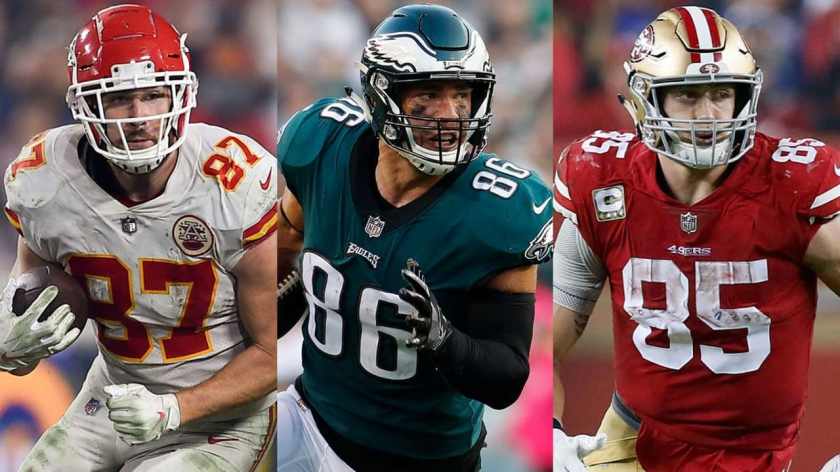 Ohhhhh Tight Ends. The weirdest position in fantasy. You either get an absolute stud in the first two rounds, a “meh, i dont love this guy” flyer in the mid rounds or a late round stud muffin like Darren Waller.

Getting a start and forget tight end is one of the better feelings in fantasy, mainly because you don’t have to sweat the position at all. Matchups seem to factor less heavily at the TE spot except for maybe one or two defenses, so capturing a stud in the draft could literally be the difference between a bum and a championship. Let’s dive into my tight end rankings!

Waller could do no wrong last season, lighting the world on fire as the one Hard Knocks star to actually break out and be insanly productive. The Raiders did add Henry Ruggs through the draft, but without a clear cut top tier receiver I believe in Waller big time this year.

Despite the large number of offensive weapons the Broncos now have, I just have a great feeling about Noah Fant. Albert-O, Sutton, Jeudy, a 3 RB room and more issues might make you weary of heading into the season with Fant as your TE1, but the kid could have a top ten finish this season.

Man, I just LOVE his ADP. Hock was a top draft pick for the Lions and started his NFL career off on the right foot before an injury took him to the IR. In the 13th round, give me a guy with top ten potential.

It’s not that I don’t love me some Gronk, some Gronky Gronk, but I mean…you expect him to just jump right back into success? WITH O.J. Howard still on the roster next to Cameron Brate? It’s just so murky. That being said, BA did come out today and say that Gronk looked 5 years younger…shit.

Higbee could be a top five play this year for the Rams after last years play, but he makes the hate list because similar to Gronk, I just don’t trust him. The Rams have Cooper Kupp for underneath tosses and Gerald Everrett is still on the roster. 8.04 is just too high for me to take a flyer, especially with some of the Love guys lower down.

See a theme here? I do NOT trust Cleveland TE’s, plain and simple. Njoku is a bummy bum, Baker is a bummy bum and I just don’t believe Hooper was as good as his position in Atlanta let him be. WTF does that mean? I’m not sold on the hype.

I normally hate on Penn State Guys (Allen Robinson, Chris Godwin, Josh Elsass) but Gesicki has solidified himself as a potential STUD in Miami. Expect him to be a nice security blanket for whoever steps into the starting role for the Dolphins.

Sweet, sweet Doyle. How you’ve fallen from grace. Rivers will bring this Colts team to a more potent level, and that means for Doyle as well. I don’t want you to break the bank for Doyle but he could be a nice flyer pick and has the potential to do work in that offense.

This is the year that Irv Smith takes over the starting role from Kyle Rudolph, leaving the Vikings with the decision to move Kyle Rudolph to a team (let’s say the Seahawks for kicks) and making Smith a stud…maybe. He isn’t being drafted so Smith Jr. is really just a watch list guy for me, but make sure you watch.