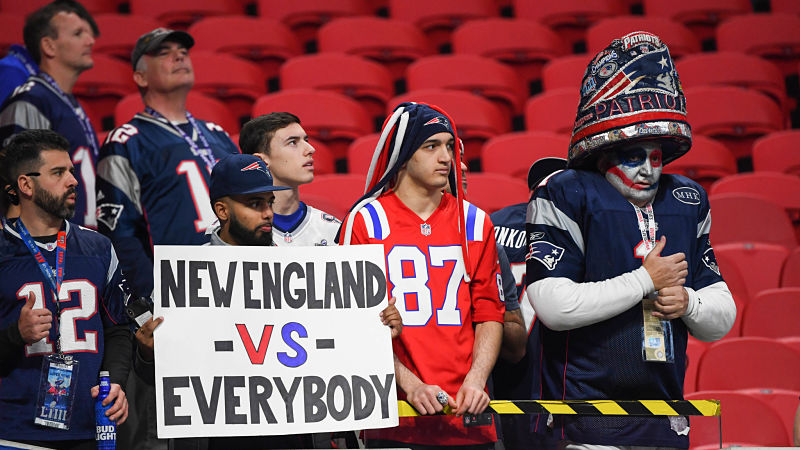 I have been meaning to do this one for a while now. In all sports, there are some annoying fanbases, but with the NFL there are some really annoying ones that just overall make me glad to be a Steelers fan in such a great city. Without any further ado, I present the top five most annoying NFL fanbases.

The Dawg Pound. A fanbase that has endured travesty for years on end. That does not make them any less annoying as fans however. They have done some pretty despicable shit over the past few years. Who could forget Bottlegate? If you have been living under a rock, Bottlegate was when the refs screwed up a call and the Browns fans responded by tossing beer bottles onto the field, at the refs and basically caused a huge scene. Or more recent when they tried to defend Myles Garrett after hitting Mason Rudolph in the head with his own helmet. Their fans responded to his season long suspension by making Mason Rudolph pinatas and were swinging at them with a Steelers helmet. I mean Jesus maybe it is because I’m a Steelers fan, but this fanbase seems extremely sour to me.

The Raiders fanbase rode the wave of success in the early years. Now they are a fanbase that no one really wants to travel to Oakland because of the Black Hole. Football’s Most Notorious Fans is an understatement. How many fights break out during these games. The crazy thing is that most of the fights happen between Raiders fans themselves. They literally booed their team off the field in their last ever home game. Notorious and Nasty are just better words for annoying in my mind.

The Eagles fanbase is a hard one to like and normally only liked if you are from Philadelphia. This group of fans has been guilty of many issues that turn my stomach and make me wonder how the this organization can be proud of this fanbase. Like when they cheered when Cowboys receiver Michael Irvin was carted off with an injured neck that ended his career. They also at one point pelted a fan dressed as Santa Claus with snowballs. Who could also forget when they won the Super Bowl so they celebrated by burning their city to the ground basically. In a city filled with annoying fans, Eagles fans are definitely some of the worst and most annoying.

The Patriots fanbase has enjoyed immense success for what seems like forever. Naturally, what comes with that are a lot of people that ride the band wagon of success. Also, the Patriots organization does have a proud fanbase whose fans will stick by them through anything. It makes them toxic to be around. Whether defending their cheating ways, bragging about Tom Brady being the greatest quarterback in the world or their multiple championships and what happens when they don’t win one. It didn’t start until the 2000’s, but man have they been a spoiled and annoying fanbase.

Welcome to the most annoying fanbase in the entire world people. The Dallas Cowboys fans, America’s team, etc.Whatever they call themselves Cowboys fans have been the pinnacle of annoying fanbase for years. Obnoxious, arrogant, annoying. These words describe this fanbase in a nutshell. Yes even more than the Pats fans. At least they have done something and won multiple Super Bowls in the modern era. The Cowboys since the 70’s and 90’s have been completely mediocre yet have fans saying they are Super Bowl bound every single year and have more prime time games than any other team I know. You guys haven’t done anything in the last 25 years yet feel like you are entitled to everything. It is the true definition of annoying. If you don’t believe me just listen to Stephen A Smith.