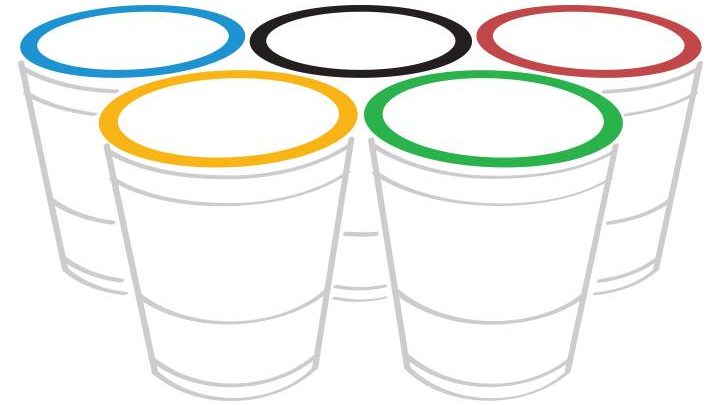 Let’s get one thing straight. If you make a Power Ranking where you are involved and you DON’T make yourself the best at that thing, you’re either A) trying to impress someone or a group of people by being humble or B) completely lying. Of course, I’m the #1 in the Power Rankings for this. There’s no question about it.

So, for the sake of just flat out not having to brag about myself, I am not an option in the TFTB Drinking Power Rankings I have below. Sad, because I would have loved to have me on my team, but I’m not one to argue with myself.

This started a while back with a few people talking with their chests puffed, and honestly, I think I have the ranking down to a complete science. It’s a combination of “Have I seen this person drink a lot” + “Did they control their alcohol?” + “Are they good at doing things while drunk” = High Ranking. Math Gawd. I also added in some of our outside talents for this one, just to spice it up. With a TFTB Beer Olympics on the horizon, I wanted to take a look at the first round of Power Rankings heading into the new year.

17. Greg Malek – Greg would agree with this. This isn’t me saying Greg can’t drink, can’t handle his stuff or doesn’t know what drinks are good, the dude just doesn’t drink that often. Oh, you think there’s something wrong with that? That’s my friend Greg. Do not make fun of my friend Greg. If this competition was only Guinness though, Greg is the #1 pick, no questions asked.

16. Vojtash – Vo….it’s nothing personal. Vo was a late bloomer to the alcohol industry, and although he’s grown over time, I just don’t know if I want Vo on my drinking team come the Olympics. I love Ryan, I just don’t know how much the man can handle is all. Prove Me Wrong Vo!

15. Cleveland Petey – Pete talks a monster sized game, but not a single person on the bench has ever seen this man drink. I know what’s going through his head at this EXACT moment too. “If you guys came to Cleveland and partied in a REAL city, you’d see.” Maybe it’s true. This is kind of like a big guy from Slovenia in the NBA draft. It sounds great in theory, but it could also just blow up in your face.

14. Marty – It’s nothing against Marty, he just falls into the category of “never really drank with him.” Marty is a competitor and I have no doubt he would be useful in a Beer Olympics, it’s just too out there for me to rank him any higher without knowing his true powers. Dark Horse candidate is written all over this pick.

13. Elsass – This one’s interesting to me. I know Josh expects me to put him in this general area because Josh thinks I find pleasure in making him squirm (which I do), but I really don’t think there’s an issue with being 10th once I name some names below. It isn’t a bad thing, but man….there’s just a lot of heavy hitters coming up. I’ve seen Josh handle his alcohol before very well. It’s the consumption amount that hurts my man in the rankings, and at this level….we’re splitting hairs. Also, Josh is 2/2 for getting drunk at Houghs. That’s a respectable stat line.

12. Austin “The RankKing” Moorhead – has a great palate for beers, one that few benchers have. He knows what tastes great AND was in a Frat(ernity), but the RankKing might have his best drinking days behind him. The main reason he’s ahead of Elsass is that Moorhead earned his letters in college, a move only a few others have performed on this list. He won’t wow you with his drinking, but he knows his beer and can shotgun with the best of them.

11. Smalls – Big School bias comes to mind with smalls, but there’s a certain respect for the secret bencher coming out of Penn State. I know Smalls can drink, but the question still remains if he can Drink. I like Smalls for these competitions mainly because of the big school bias, and there’s something about a man who wears shades a lot that says “I’ll drink anything”. Sign me up.

10. Boyd – The Idiot Hour Cohost knows his beer, but there are major questions as to his ability to consume when it comes time to perform. I’ve been to bars with Boyd and his ability to never really stop drinking is his key reasoning for being in the top ten. We’ll have to wait and see how his bar games produce, but if his beer pong game is ANYTHING like his bowling game, I think he’ll do just fine.

9. Benny Buckets – I fought with where to put the Buckets man on this list, but his military background mastered with his ability to say “No” to a bar full of bloggers when asked if he wants another one is a strength a few of these guys have. Ex-Military guys are known for their ability to drink, and Benny is no slouch in that department. Plus, he is most likely to willingly go through a table other than the buffalo kid himself.

8. Brooksy – I have seen this man perform under pressure multiple times at Social for the Cornhole league, and he always has a drink and a smile. Brooksy is my pick to win a majority of the events we will do for TFTB, mainly because I think the kids a winner. I’ll take the L on the cheek for the Wiffle ball tourney, but Brooksy comes back and impresses all in the Summer Olympics.

7. Geis – Geis is an enigma, plain and simple. The scotch-king himself, Mike is an excellent drunk performer, earning his letters down in West Virginia. The man works for the government, solidifying a need for regular alcohol consump[tion in DC. Mike is an excellent athlete as well despite having a head the size of the Titanic and should be one of the better smack talkers in the entire event….if he shows.

6. Andre – Is there anyone on this list that can get under your skin like Dre? Andre is a drinker, plain and simple. The man is a partier and is loved by all, a deadly combination for other teams during the “down” time in between events. Dre can out drink you, and then make you think you should drink more, a combination that few guys are better at on this list. Don’t believe me? Ask the Yinzer Mob.

5. Fish Dawg – Fish is a long time friend of the bench and everyones favorite addition to any event. A service industry aficionado, this dude lives and breathes good times. I know what this man can consume, and I’m pretty sure everyone would be lucky to have the fish on their team this summer if not for the simple fact that he does, in fact, drink like a fish.

4. Mac – Being from Buffalo, being in a Frat(ernity) AND always being down to get a beer…three key components to an all-time great for the TFTB Beer Olympics. Mac isn’t just a favorite to be taken in the first round, his team could easily win based on his tactics alone. I know he can play beer pong, I know he can swing a Wiffle ball bat and I know he hates losing….watch out for this kid come Olympics time.

3. Tom “Cap” Dube – I love me some cornhole team man. Cap is a winner, plain and simple. Cap is at social every week, drink in hand, ready to go. I have never seen the man do anything but give his all, making me believe he will be an instant power house come Olympics time. Even though Cap isn’t number one on this list, look for him to be at the top of the leader board.

2. Denny – The King of Pink Whitney is right where he belongs on this list. Denny is the guy that brings alcohol, the guy that buys you a drink when you don’t know what you want and one of the few guys who still works out on the bench. He has the same skill set as Dre, making you think you should drink more whether it helps your team or more.

Number One Overall! – King Mitchell – If this competiton had a combo of mixed drinks and beer, I might have let Cap or Denny slip to the one spot, but there’s no one that can our beer the King himself in Ryan. The Cornhole team’s anchor, this guy is the life of any event. His welcoming demeanor is absolutely going to make people drink around him, a great tactic for beer Olympics to make your foes fall by the wayside. If you want to win, pick Ryan. That simple.