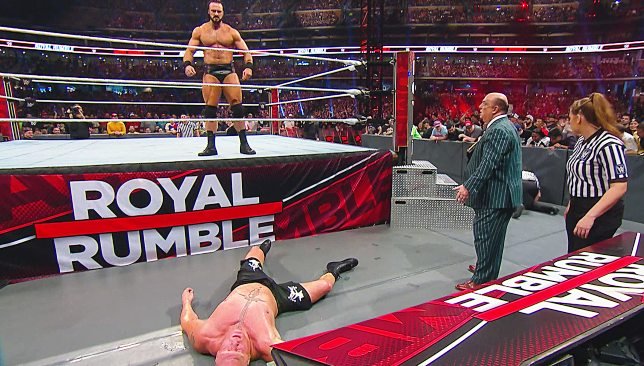 Last night the WWE had their 34th Royal Rumble. The event had a few major landmarks and happenings that you need to know about as we head down the Road To WrestleMania.

Drew Mcintyre and Charlotte Flair won their respective rumbles. So they will get to pick which Champion they want to face at WrestleMania. Now, this does not guarantee a singles match between them and the Champion, but it almost always assures that those two will be in a Match together.

Brock Lesnar entered the Royal Rumble in the number one spot. He then single-handedly eliminated the next 13 opponents. The string of individuals was mostly comprised of Jobbers. But it also featured Lesnar locked in battle with Keith Lee and Braun Strowman at the same time. This leads to an incredible sequence that displayed Brock’s willingness to still “go” when the situation suits him. There still isn’t a clip online but it’s worth going to find it on the network.

Finally, at number 15 Ricochet came to the ring. He managed to stay in long enough for number 16 to come to the ring. As the clock hit zero and Drew Mcintyre made his way to the ring the place came unglued. To this point, the crowd in the building and at home had enough of the Brock Show and then knew with the emergence of Mcintyre that it was over. After an assist from Ricochet, it was the Scottish Psychopath who eliminated the beast.

This is huge for so many reasons. One, Drew won the rumble so it almost guarantees Drew and Brock at Mania.

Second, the elimination immediately gave Drew the crowds backing. Which is something most of the Men’s Rumble winners don’t have? It was truly a brilliant piece of booking by WWE, and should be noted.

After an epic strap match with the Daniel Bryan, Bray Wyatt and The Fiend retained their status as Universal Champion. And after the storyline of the Rumble, it is clear that Bray does not have an opponent for Mania yet. A number of people believe it will be Roman, which makes a lot of sense, but that is still an exciting prospect to see play out.

She came in at the coveted number 30 spot and promptly cleared 8 performers from the ring. She was in the final two with Charlotte, and for the better part of the exchange looked as though she would win. The Queen of Spades has really captured the hearts of the WWE Universe. After a truly historic run in NXT everyone wondered when she came to the main roster would she get the push she deserves? Or would she be saddled as Rhonda’s back up dancer and be doomed to a life of insignificance.

According to all reports, Vince loves her and sees big things for her. And her Rumble performance last night would back that up. Since Bayley retained her title, it seems like an easy first target for the Queen of Spades. And then possibly a bigger role in a possible eight women tag match at Mania.

Number 21 in the Men’s Royal Rumble served as the return of Edge. When the haunting women’s voice whispered to the crowd, “you think you know me” the place went ballistic. Hell my living room went ballistic.

Edge was a guy whose career was cut dramatically short and ended while he was literally the champion of the company. Wrestling fans have pined for his return for a long time, and for a long time were told its never gonna happen. But never say never.

Edge’s emergence gave us previews of possible dream matches like his exchange with AJ Styles. And gave us all the Member Berries when team Rated RKO joined forces again.

The Men’s Rumble finale was special. At one point in the ring was, Samoa Joe, Kevin Owens, Matt Riddle, Drew Mcintyre, Edge, Randy Orton, Aleister Black, Seth Rollins, and Roman Reigns. I got the warm and fuzzies looking at that collection of talent in the ring. It felt like for the first time in a long time, the WWE had the right people in the Rumble at the end. A collection of current talent sprinkled in with a few beloved veterans. All battling for the right to be “The Guy”. Another niece booking touch from WWE.

There was one person whose absence rang louder than everyone else appearance. C.M. Punk was speculated to be entering the Rumble this year. It turns out he didn’t. In fact, it seems like he wasn’t even in the building. My guess is Tuesday WWE Backstage will have a spike in viewership.

The closer we got to the Rumble the more it felt certain that it would be the night of his return. However, as we continue down the road to WrestleMania two things give me optimism that I will still get to see Punk wrestle. One, Seth Rollins still needs an opponent for Mania. Two, never say never.