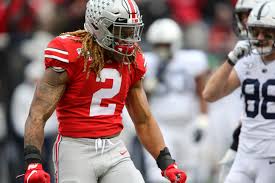 It is that time of year, the game. THE Ohio State University vs. TTUN up at the Big House in Ann Arbor. The rivalry which literally started as a war over Toledo, will have another chapter written in its illustrious history tomorrow.

Ohio State could lose every game up until we played TTUN, but as long as we beat them, I could give a damn what happened the previous games.

It was Ohio State legend Maurice Clarett’s freshman year, and Ohio State trailed for most of the game. Leading 14-9, Ohio State had to withstand one final attempt from TTUN, which the Buckeyes intercepted on the goal line.

Often dubbed the greatest game in college football, at the start of the season everybody talked about the lead up this game, seemingly knowing that Ohio State and TTUN were going to be #1 and #2, both undefeated heading into the game. The crowd going insane for script Ohio down in the shoe before the game, to the sold out atmosphere, it was a game unlike any other the rivalry had seen before.

Troy Smith cemented his place in Ohio State legend, throwing for four touchdowns and leading the Buckeyes to a nail biting, 42-39 win and sending Ohio State to the national title game once again.

“GAME OVER…. Ohio State will play for a national championship.”

A spot in the Big 10 title game was on the line, as was a spot in the College Football Playoff.

Ohio State played awful all day, missing field goals, turning the ball over, missing extra points. It was not looking like a good day for the Buckeyes.

Tyler Durbin nailed a field goal as time expired to send the game into overtime, Ohio State got fortunate on a spot on fourth and one, and the rest, well…

Fresh off of an embarrassing loss to 29 on the road to PURDUE, Ohio State was underdogs in the game for the first time in a while.

They were also going up against the, “best defense in the country.”

I am fortunate enough to have gotten a ticket for the game tomorrow up in the Big House. And I CANNOT WAIT to hear, “O-H-I-O” after the MIGHTY Chase Young, Justin Fields, Dobbins and the rest of THE Ohio State Buckeyes take it to the TTUN.