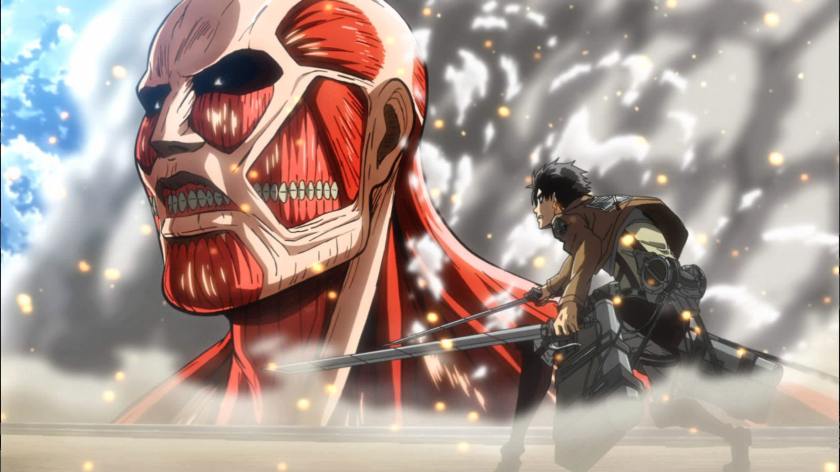 As a fella that watches a lot of television and movies, you figured at one point or another, I’d talk about animes. So today, I am going to talk about one that I just went through and watched. That anime is Attack on Titan.

Man this is anime is great. It was wonderful to watch it through this far. Even with all I’ve watched, there remains one final season left to view. I can’t really put the trailer up here without revealing important details so you’ll have to watch it on your own. An important factor here. Watch the show on Hulu. It has English Dub and all three seasons. Netflix does not have English Dub and only has one season. So why is Attack on Titan so great? Well let me sum it up.

Attack on Titans features some of the best character work in all of anime in my honest opinion. From countless inside struggles, comic relief, hardships through memory, these characters give the show the fuel it needs through some incredible developments and storytelling. Our three main characters Eren, Mikasa, and Armin are a nice trio to be invested in. The others definitely play a part in their story like Captains Erwen and Captain Levi, and the other members of the Scouts. Man the characters are just so damn interesting to the story.

The plot is such a huge part of why this anime is so different and so great! Giant mindless human like creatures called Titans are rampaging throughout the world. The rest of humanity desperately tries to hang on by hiding behind three walls; Maria, Rose, and Sheena. With years of peace behind these walls, naturally happiness can’t last. A giant Titan appears and breaks down the first wall allowing Titans to swarm in and attack. It is then our heroes are put on their path to join the Scouts and take out the Titans once and for all.

The Different Types of Titans

I know I couldn’t give too much information, but I am telling you this is one of the best animes I have seen. I hope you guys give it a chance and get prepared for the fourth and final season set to air in October. Check it out so you guys can all get caught up!