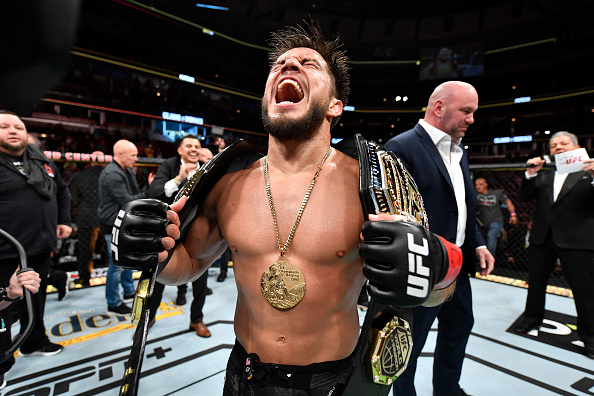 Last night the UFC went through with putting on UFC 249. They’re the first American major sport to get back to putting on events since the Covid-19 pandemic. It was one of the most stacked cards I’ve ever seen. The Prelims were extended and had a jam packed fight card altogether. The fact that a fight between Donald Cerone and Anthony Pettis wasn’t on the pay per view should tell you something. So let’s get a rundown of the fights and break them down.

Ryan Spann (yellow trunks) def Sam ALVEY by a split decision last night. It was a close and boring fight, but was most likely a resume builder for Spann to defeat a veteran like Alvey. Spann is now riding an 8-fight win streak and looks to continue it soon.

Bryce Mitchell, better known as Thug Nasty put on an absolute clinic on Charles Rosa. It went to a decision but it was a unanimous decision. I give Rosa credit for being able to take the beating he took but this was a statement for Mitchell to be taken seriously in that division.

This fight was pretty close until the third round when Luque was able to capitalize on Price’s slow reactions and poor defense and tallied a TKO for the victory.

This fight was pretty damn good. Two gritty female fighters who are veterans of the game who put it all out there. It went down to a split decision that was given to Esperanza which made this a massive win for her career.

This fight was probably the most disappointing of the night. I expected these two to go at each other but they were too hesitant. It wasn’t even really a technical fight it was just slow. It came down to yet another split decision which went in favor of Oleinik. This probably wouldn’t have happened if Werdum took advantage when he got Aleksei on the ground.

Pettis was riding back to back losses and Cerrone was coming off his most recent loss to Conor MacGregor. These two are high profile fighters who aren’t used to being seen in the prelims. These guys have also fought before and definitely tried to settle the score last night. It was blow for blow and take down for take down but Pettis’ technicality got the best of Cerrone and Pettis won by split decision.

Greg Hardy won over Yorgan Decastro by unanimous decision. A lot of people question the validity of the ex NFL Star Hardy due to his history with domestic violence. But he has slowly but surely been proving a point for him to stay in the organization with prime time fights such as the work he put on Decastro last night.

Up until the end, this was possibly the second most exciting fight of the night. They were just going AT IT. Kattar ended up knocking out Stephens in the second round for the victory. It was shocking and bloody. Stephens looked so disoriented. This was a HUGE win for the progression of Calvin Kattar.

I had anticipated this fight to be blow for blow considering both of these heavyweights are some tough dudes but Ngannou’s opening strength was too much for Rozenstruik to handle. It only took Francis 20 seconds in the FIRST ROUND to knock him out. Continuing to add to the legitimacy of Ngannou’s growing legacy.

Henry Cejudo retained his title last night by landing a TKO against Dominick Cruz in the 2nd round. Cruz is a UFC legend and deserves respect but hasn’t fought in over 3 years. Cejudo took advantage of that for the win. Afterwards, Cejudo announced to the world that he will be retiring after that title defense. At 33 years old he still leaves a great legacy behind him as one of the best wrestlers to hit the UFC.

Gaethje shocked the entire UFC by defeating Ferguson for the title last night by TKO in the 5th round. Ferguson didn’t necessarily fight poorly but Gaethje had the best fight of his life and was feeding Ferguson punches all night. After the fight, Gaethje tried to approach Ferguson and he pushed Gaethje away. Gaethje then said he didn’t want the interim belt and will wait for the real one. Lot of drama at the end there. Ferguson was set to be the next in the division to fight Khabib Nermogumedov. But after this loss I wonder if the UFC will go in another direction.

The UFC handled the entire event very well. It was odd with no crowd, but still held the same level of excitement. Even to be Covid compliment, the announcers were spread out around the octagon. All trainers, and security personnel were wearing protective gear. The UFC jam packed the fight card from start to finish. With plenty of big names that kept even the most casual of fans interested. The UFC showed us how it should be done even in this trying time. They also proved their argument for quite possibly being the best pro sport in America.

To Dana White and all executives at UFC, I am thoroughly impressed. Well done.