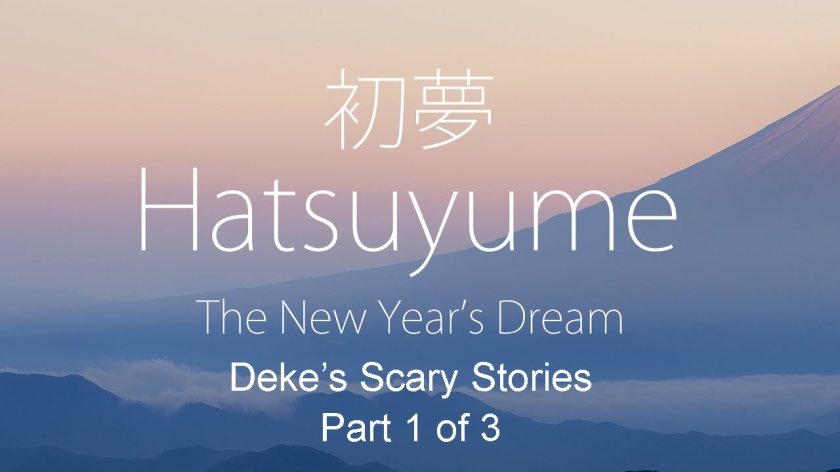 Hatsuyume is a Japanese description of the first dream a person has in the new year. The meaning behind it (based on my quick google search) is that basically, the first dream you have for the new year will come true. For the love of GOD, I hope that’s far from the truth.

I have extremely vivid nightmares. To the point that it’s sometimes hard to describe them to people. Where most dreams flee from your thoughts the more you try to remember them, these nightmares reveal more about themselves as I tell the story. I feel things in the dreams, like fabrics or the ground beneath me. I have dreams inside of dreams, which on one level is really kind of amazing. Except, they only happen with nightmares. I’ve had four of these dreams in my life, two of which happened last night. Mac was kind enough to tell me to blog them, either A) because he’s actually interested or B) for views. Either way, happy to tell these tales on TFTB.

Editors Note (Yes I actually proofread these articles, sometimes at least): I told Deke to Blog these things because it’s my job…but continue Deke.

Let me start this three part nightmare train off with one I had in Texas with Kayle so you get my drift here.

We were in our hotel room sleeping, typical night time shit. In the first dream in Texas, I was searching through a house to find this noise. It didn’t quite sound like a women screaming, but it was so close that I knew it (obviously) wasn’t good. I searched through this house that was, as is tradition, terribly lit and all cobwebby and what not.

As I walk through the house, the noise (which I can now tell is a muffled woman’s laugh) grows louder. The effed up part? I apparently add background music to my nightmares. Sick right? The music was soft and would traditionally have been calming if not in the situation. Almost rythmic tones played on pipes, but soft and close enough together to just let me know they were there as I searched.

I pull open the door and BOOM – Scary scary ghost lady. Like….super scary ghost lady. So, as I normally do, I woke up in a sweat in my hotel toom in Texas. Nice, plain and simple typical Deke nightmare. I look to my right and there’s my girlfriend, sound asleep. I can still hear a faint noise outside our apartment building, but this time the laughter is natural, like people actually walking down the hallway. Grab a drink of water, check my phone, and as soon as I lay back down to sleep I see the sheets at the end of the bed move, just enough to make me stare at it. I watched as the sheet laid still, honestly thinking it was Kayle just twitching.

As I finally gave up hope, it moves again, this time enough to make me think about it. As I stare again, a dark, gloomy hand shoots up to the bottom of the bed. it grabbed the sheets slowly, and then as soon as I was about to scream, enough arms flew up from under the bed to cover the entire outside of the bed, all frantically crawling overtop of one another to get to us. I looked at Kayle as she lay there, completely unaware of the danger. And I did what any man would do in this situation. I SCREAMED AT THE TOP OF MY FREAKING LUNGS.

Of course then I woke up. I quickly found out that the laughter was real. The checking the phone wasn’t. And Kayle slept through it all. Kind of impressive, honestly. THAT is just a small piece of what my nights are like sometimes and I hate myself for it. But hey, at least I’m creative right? At least I’m aware enough to know how to scare myself to near death.

Check Out Part 2 of messed up dreams here