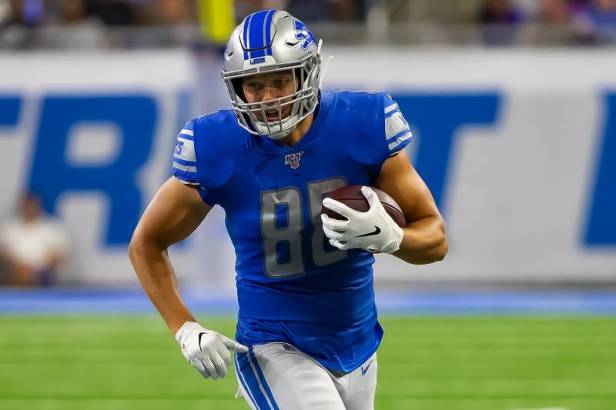 Hockenson is hard to trust since his biggest performance of the season in week one, but this week he has to go off right? Hockenson is facing a Raiders defense that is absolutely dreadful against the tight end position. They have given up six touchdowns and the third most points to tight ends. With so many teams on bye I am putting full trust in Hockenson as my start of the week this week.

Greg Olsen hasn’t done much aside from a decent game or two. However, with four teams on bye and not a lot to look for in the tight end position I would give Olsen a much needed start this weekend against the Tennessee Titans. Their defense has given up four touchdowns to the position and there have been four performances from tight ends that ranged in the top ten from their respective weeks. It isn’t much, but I’ll put him as a start this week for week nine for those reasons.

You might look at this week’s matchup with the Colts and think maybe I am crazy, but something is telling me that Vance McDonald is a solid start this week. Again, he didn’t do much last week against the Dolphins catching only three out of four targets for 19 yards. Plus the Colts have only allowed one tight end to score all season. So why play him? Contrary to that, for some reason the Colts are the 27th ranked defense against the tight end position. If you are in a deep league and have no other options play Vance McDonald and be like me and hope for some good points.

Ebron falls into the mix of tight ends to start and not Doyle. I don’t know why, but again I have a feeling that Ebron is due for a big game, and sadly it will be up against my hometown boys; the Pittsburgh Steelers. For so long the Steelers have had trouble with running backs and tight ends. I see Brissett taking advantage of this and tossing some strong throws Ebron’s way especially since the Steelers are ranked the 25th worst team against the tight end position.

Smith did incredible last weekend filling in for Delanie Walker against a terrible Tampa Bay Buccaneers defense. He caught six of seven targets thrown his way for 78 yards and a touchdown. If Walker is out again (which is looking to be the case) I would start Smith as Tannehill took a real liking to him last weekend. It is a risky start though as the Panthers are a really good defense, but 49ers tight end George Kittle burned them last weekend scoring more almost 15 fantasy points. It is worth the risk.

While a matchup against the New York Giants pass defense seems like a nice win for any receiving position, it actually hasn’t been that great for the tight end position. Witten only got 15 yards against them in their home opener and the Giants have actually given up the fourth fewest points to tight ends. You may have to play him based on how many teams are on a bye, but I am just warning you it doesn’t look great this weekend for Old Man Witten.

This one is a damn shame because like me most of you have no choice, but to play Mark Andrews this week. Why wouldn’t you right? He is one of the best tight end prospects this season. Then you look at who he is facing; the New England Patriots. The Patriots are the best team in the NFL when covering tight ends and somehow I have a hunch that Jackson is going to be overloaded by this defense making Andrews probably my riskiest start of the week. You have to play him, but you don’t have to like it.

Graham is so inconsistent and unreliable in some formats that it is ridiculous at this point. Again with so many teams on bye you will probably have to start him. However, I assume owners are just as skeptical to play him. He has scored fewer than eight points in all but one of his last four games. Not only that, but there is a possibility that Adams comes back into the lineup this weekend which means cutting targets from Graham as well. Avoid this matchup this week and save yourself the grief of the aftermath.

Fant had a larger size of targets last weekend considering the departure of Emmanuel Sanders with eight on the day against the Colts. However, he didn’t do much with those as he only caught five of those targets and managed just 26 yards. Maybe he will do something special in this game, but until he has a consistent line of stats I cannot trust him in my lineup this weekend even if it is against the Cleveland Browns and neither should you.

Rudolph is back in the sit column this weekend against the Kansas City Chiefs. Realistically, it is amazing how they didn’t trade him with Irv Smith Jr. on the rise. His volume and targets may have increased over the past two weeks, but it was mostly because Adam Thielen was out due to an injury. With him returning to the lineup most likely this weekend against the Chiefs, Rudolph should revert back to his inconsistent points and be irrelevant yet again.