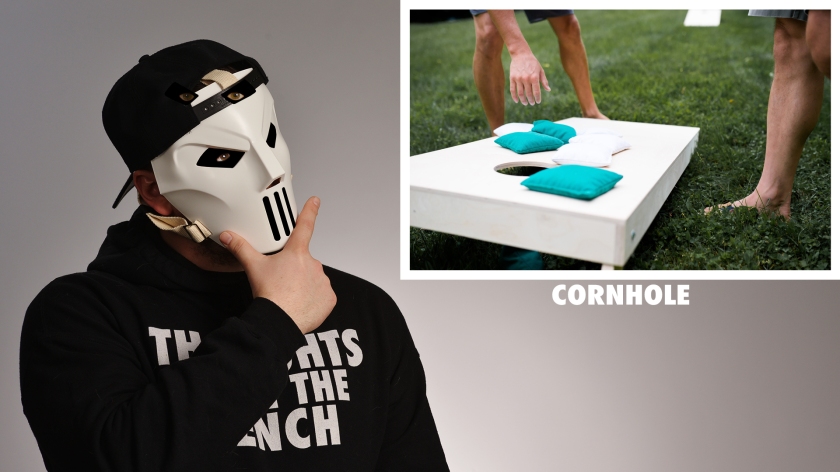 Cornhole- What is this all about?

Hey folks, Violence is back to give an opinion on the craze that is sweeping the nation.  The easiest sport for frat guys, alcoholics, and country fans- CORNHOLE.

What is it, what is the point, why is this great?  These are the questions I ask myself every time I see one of those videos from the Thoughts from the Bench Cornhole team.

Clearly this is a sport that requires determination, skill, concentration and balls.  I mean, look at the 3 whole are sponsored by this blog………………………..yeah.

So, I started to research and figure out the premise of Cornhole.  First one to 21 wins, easy enough. Well here is why that’s actual laughable.  Regulation boards are 27 feet apart. 27 FEET! I am no weight lifter but chucking a bag of corn 27 feet to land in a hole that is 6 inches in diameter and centered 9 inches from the top of the board and 12 inches from each side, ain’t no easy feat.  6 inches isn’t that big, ask the ladies.

So, then I started watching the ACL- American Cornhole League for you uncultured swine.  And that is when I saw Daymon Dennis. I have never seen anyone more annoyed with a bag and a board.  He HAD to knock his opponents’ bag off the board and get the bag in the hole to keep his team above water.  Problem is, the opponent’s bag was situated in the back of hole, which in theory is the safest place for that bag.  Well this grumpy Gus, gives the world the greatest shot imaginable. Watch it.

So, THEN I dig in deeper, and I am starting to get swept up in the fans and the atmosphere.  I am not proud of it, but it happened and now I am telling you all about it. Did you know when someone gets 4 bags in the hole the crowd is supposed to yell 4 BAGGER?! Me neither!  It was as common as Red Sox fans screaming YOUKKKKKKKK when Kevin Youkilis steps on the field. So, I re-watched those videos from the Cornhole team, not a single fan screams that. So that leads me to believe, not a single player can get a 4 bagger- PROVE. ME. WRONG.

Did you know there is a thing called a Bully Bag?  Me neither! It is when a player lands a bag slightly off to the left or right of the front of the hole forcing the other player to slide around the bag or take their bag in with theirs.  Who knew there was so much technique to throwing? Don’t get me started on smooth side or sticky side….of the bags that is, not the sheets at some cheap motel.

But then I started to think, what is the real reason people play cornhole?  To DRINK BEER!

Here are the top 5 beers to drink while playing cornhole.

Number 5.  Iron City- I am going to throw a shout out to those boys in Pittsburgh.  Kudos on your crappy beer and your sport I enjoy mocking. This watered-down taste of the Mon really quenches the thirst after a hard-fought battle to 21.

Number 4. Blue Moon.  Who doesn’t want an orange peel to make you think you are working as hard as a kid on a soccer field?

Number 3.  Hala Kahiki.  I had this little number while I was in NC.  Turns out it doesn’t suck as a pineapple beer.  Can’t pronounce it? Think of Griswold Christmas and Clark is staring out of his back window at a girl who would never in the real world give him the time of day and a song starts playing- did a light bulb go off in your brain?

Don’t agree with me?  Come at me! Violence out!

Oh, ps.  Good Luck Thoughts from the Bench Cornhole team.  Win another championship and get this sport more street cred.