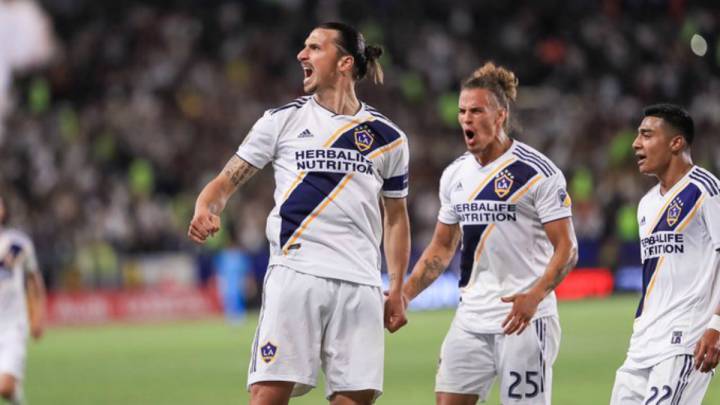 Since his memorable first El Trafico (introducing himself to MLS with his 40+ yard wonder goal), Zlatan Ibrahimovic has been making big waves, possibly tsunami sized, since his arrival in MLS. A large part of the storm has been his play on the field. However, he is taking it a step further, mincing words with reporters and straight up calling out the strikingly low level of quality in America’s top flight. And I love it.

Prior to the most recent installment of El Trafico, which took place this past Friday, Zlatan, 37, claimed it was a “mistake” that reporters would even consider comparing him to Carlos Vela, the 30 year-old of LAFC who is currently tops of both the scoring and assist charts in the MLS. Zlatan, the self-proclaimed “god”, said he was “by far” the better player than Vela. He then went on to pose the question: “Where was I playing when I was 29? In Europe, that’s right”, a thinly veiled swipe at Vela, who has only played short stints for Arsenal and West Brom, while spending the majority of his career grinding away at Real Sociedad, who hardly had a sniff of European football outside Spain. Zlatan, at 29, was between seasons with Barcelona and AC Milan, both teams winning their respective domestic leagues.

Of course, Ibrahimovic could have very well talked the talk and present no further evidence. But during the derby between the two Los Angeles clubs, Zlatan recorded a spectacular hat-trick (Vela recorded two goals) as he single-handedly led his club to a 3-2 win against the current top of the table club in MLS. At this moment, Zlatan proved he was the better player, or at least when it counted.

But while Zlatan has always been in rarefied air, (although under the level of Messi and Ronaldo), it still speaks volumes to the state of the MLS and the US Soccer system that a 37 year-old player can still be dominant in a league that is supposedly trying to become one of the premier domestic leagues in the world. Currently the MLS is known throughout the international footballing community mostly as the pre-retirement league: once great players who are aging and nearing the end of their careers can come to America, get a nice big paycheck for a few more years, then hang up their cleats. That’s not to say that there have not been careers launched from the MLS (looking at you Tyler Adams), but more come here to die than to start.

Unfortunately, the MLS will continue to be a sub-par league in international football. However, it is also important to realize how young the league is compared to other domestic leagues around the world, only being established in 1996. Other issues, such as fan engagement/attendance and ownership investment also limits the league, as well as US Soccer’s current infrastructure and academy system lacking the ability to produce generational stars in the men’s game (let’s wait to see how Pulisic does at Chelsea). Zlatan is taking his shots at the broken system, because he knows the where the MLS wants to go, but knows it is nowhere even close to producing a level of play similar to La Liga, Serie A, or the Premier League. He is using his platform not only to mix the pot with his colleagues (looking at you, Carlos), but to also demonstrate to U.S. Soccer the disparity between their development model and domestic end product compared to the glory of Europe. He has effectively put the ball in their court by being the dominant presence, both on and off the field. With a little luck, it may spurn the league and national system into a push for a better product.