Both Dwayne Wade and Dirk Nowitzki both played their final games in front of their respective home crowds of Miami and Dallas on Tuesday, April 9th 2019.  Both of these guys have done so much in their career that there is no physical way I can fit it in all in an article.  I could write a book with all that they’ve accomplished.  So I’m more so going to focus on the impact they’ve had on the league, and how things will never be the same without them. In Flash’s 16 career, he has racked up 13x All-Star appearances, 1x All-Star game MVP, 2x scoring titles, 8x All-NBA selections, 3x All-Defense selections, 3x Olympic medalist (2 gold, 1 bronze), 5x Finals appearances, 3x Finals Championships and 1x Finals MVP.  Wade was drafted the same year as LeBron James, Chris Bosh, Carmelo Anthony and other stars by the Heat out of Marquette in 2003.  He went on to play there for 13 consecutive years, where he won 3 titles in 2006 (Finals MVP), 2012 and 2013. Wade has and always will be Miami’s most prolific player.  The effect he had on their community and their sports history is unparalleled.  He then briefly left to play for his hometown Bulls in 2016.  Then rejoined LeBron in Cleveland, to then get traded back to the Heat in the 2017-2018 season.  It was poetry that he ended up back there, proving fate decided he needed to retire with the Heat.  Before this season, he declared that this would be his final season, igniting the “One Last Dance” tour, where we have seen him swap jerseys with a member of every team this season.  Dwayne is such a respected guy around the league.  He is one of the fiercest competitors to ever hit the court, and an even better man off of it.  D-Wade is an icon of the sport and his presence will be missed by any true basketball fan. 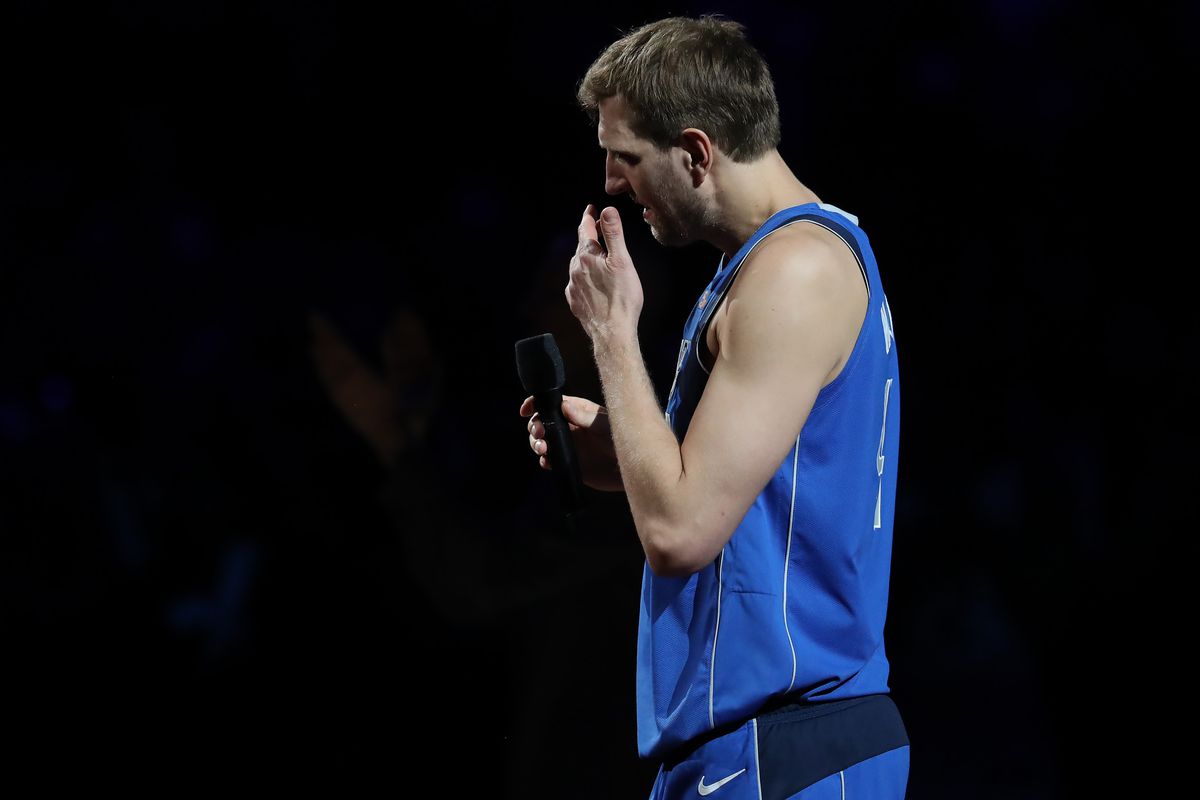 Swish has played an incredible 21 seasons in the league, and more shockingly all with the Dallas Mavericks.  Dirk was a quirky 7’0 German who was selected by the Bucks in the 1998 draft, who was then traded that night to the Mavs.  That is where the European Cinderella story began. Dirk paved the way for a lot of foreign player by displaying dominance year after year as one of the only 7 footers who could play like a guard.  Dirk is a 14x All-Star, 12x All-NBA selection, 1x league MVP (2006), and 1x Finals champion and  MVP.  Dirk finishes his career as the 6th all time scorer in NBA history with 31,510 points.  Dirk has been a mentor to countless former and current Mavericks.  He has been a true class act as a caring professional ambassador for the game of basketball.  Dirk has been such a fun guy to watch as well.  Dirk has a great personality and is one of the easiest guys in the league to love.  And to keep that up for 21 years is truly something special.  There are some who have been compared to him, but there will NEVER be another Dirk.  Truly one of a kind.

These two are ironically connected in multiple ways.  Obviously they both are retiring this year, they both got to play in front of the home crowds of the teams they began their career with, AND they both dropped 30 points in their final games.  Dwayne with 30 in a win over the 76ers, and Dirk with 30 in a win over the Suns.  What a way to go out.  If you combine those performances, they’d equal Kobe’s final performance.  These two also faced each other TWICE in the finals.  In 2006 when Wade’s heat defeated Dirk’s Mavs and Wade won the finals MVP, then in 2011 when Dirk got his revenge with a surprising title win over the Wade, James Bosh Heat’s first year together where Dirk won finals MVP.  These two both are their franchises leading scorer and lead in multiple categories all time for their teams and are arguably the most beloved of those franchises too.  They both were 2019 “honorary” All-Star selections for their final seasons.  And the biggest similarity for these guys is that they both are bigger than basketball.  These two are selfless, stand up men in the way they carry themselves on and off the court.  They are fearless and skilled players who are both hands down first ballot hall of famers.  They are the types of role models all young athletes and people in general should look up to.  They are a gold standard of NBA player, athlete and man.  These two are in a league of their own and the NBA, let alone sports won’t be the same without them.  So to both of you, thank you.