Antonio Brown over the last 9 years has consistently shown he has “Hall of Fame” caliber talent, but over the last few months has more so shown that he is a dumbass.  Antonio Brown has shown greed, jealousy and pettiness to the entire Steelers organization.  At first I was sad to see him go, but now I couldn’t be happier.  He has BEEN a problem, it’s just coming to light more now.  He has most recently been more focused on blue hair, blonde mustaches, twitter, and making $500 Cameo videos like this one…

I mean are you kidding me?  “Happy anniversary… weddin”.  Jesus H. man.  Antonio Brown has claimed he “doesn’t need football”  when he didn’t finish his degree, has had problems with the law and clearly doesn’t have a future as an actor.  Except the only acting he’s good at is acting like he is any way shape or form coming out on top in this argument.  AB has went after Tomlin, Ben and JuJu who are all beloved in the city, and you think fans will have your back?  Then you go to Oakland with a struggling QB on a team projected to go (5-11) this season, and think that’s a better situation than playing with a HOF QB and other talented receivers, a promising RB and a progressing defense?  He just walked into arguably the most competitive division in football with Kansas City, LA Chargers and Denver.  Good luck buddy.  AB is no doubt a star, but won’t have a JuJu to take the pressure off of him.  He won’t have any other weapons so all defensive attention will be on him.  He won’t have a sound organization who has their shit together.  He’s going to a piss poor rebuilding team and his numbers will drastically decline.

Meanwhile, JuJu Smith-Schuster had a career year in his 2nd season after a great rookie season as well.  JuJu had 111receptions, 1,426 yards, and 7 TD’s to AB’s 104 receptions, 1,297 yards and 15 TD’s.  Those are all solid numbers but AB “didn’t get the ball enough”?  As Stephen A Smith would say, “PROPOSTEROUS!”  See what AB suffers from is what professional psychologists call Malignant Narcissism.  Which is defined as a psychological syndrome that is comprised of an extreme mix of narcissism, anti social behavior, aggression and sadism, always ready to raise hostility levels.  The malignant narcissist undermines families and organizations in which they are involved and dehumanizes the people they associate with.  AB has been toxic and most of all with JuJu Smith-Schuster.  They have most recently been in a Twitter battle shown below. 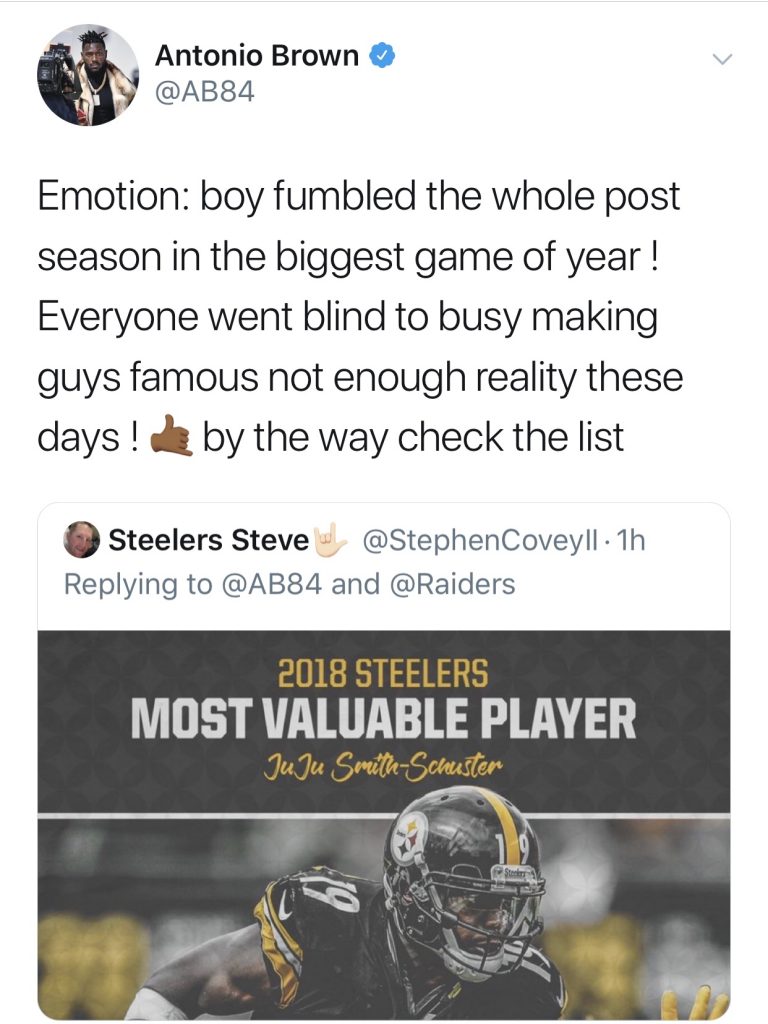 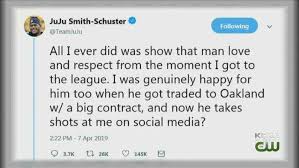 I purely think this derives from jealousy.  JuJu won the team’s MVP award this year deservingly.  AB is salty as sea water because a new young wide receiver shows signs of possibly surpassing his level of excellence.

When you’ve got a 21 year old kid who can play like that, I think he’s more than ready to take AB’s place as Pittsburgh’s WR1.  JuJu also WANTS to be in Pittsburgh.  He continuously shows genuine gratitude to play there.  He is talented, good spirited and hungry.  All AB is doing by stirring things up is motivating the Steelers.  Ben is going to feed JuJu and our other receivers the ball relentlessly.  Ben has two super bowls NOT with AB.  Ben made the careers of receivers like Hines Ward, Santonio Holmes, Antwan Randle El, Mike Wallace and others who only steadily produced while playing with Ben.  I think Ben made AB more than AB made Ben.  We’ll see this season.  But bottom line is sure AB got a contract, but with a poor team who doesn’t stand a chance this year.  While Pittsburgh is fired up, pissed off and fueled to perform without Brown and Bell.  JuJu has something to prove, and he’s already proven A LOT.  Steelers fans, get excited.  Because you just dumped two of the most toxic players in the game to two bum ass teams while your team unity has only grown stronger from it.  And as for the rest of the league, watch out.  The Steelers now have a fire lit under their asses and are coming for blood.  They have a sound foundation and their receiver of the future.  They made the right choice, and I more than believe that will come to fruition this year.  Oh and AB… YOUS A BIIIIITCH, BIIIIIITCH!!!!!!