The first match of Mania Weekend was hands down in the top five. No one put much thought into this match and maybe that allowed them to over deliver. Who knows, all we know is that it tore the f***ing house down. Black and Ricochet in their swan song to NXT they left everything out there. So much so that for most of the match our group was loudly yelling reminders they have to wrestle on Sunday. The War Raiders for their part were game to send their indie friends out on a high note. The match was non stop action and highlighted all four members in their best light. 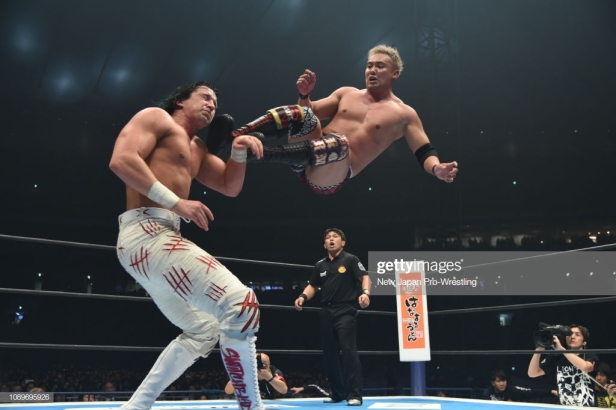 This match was a point of contention this weekend. Everyone wanted Okada to win but thought Switchblade would retain. It was also a true test for Jay White to prove he could hang with New Japan’s top star. In a pleasant surprise everyone left happy. Okada became the five time IWGP Heavyweight Champion. Jay White proved he could hang with the Rainmaker. And New Japan gave an epic main event to their marquee show at Madison Square Garden. 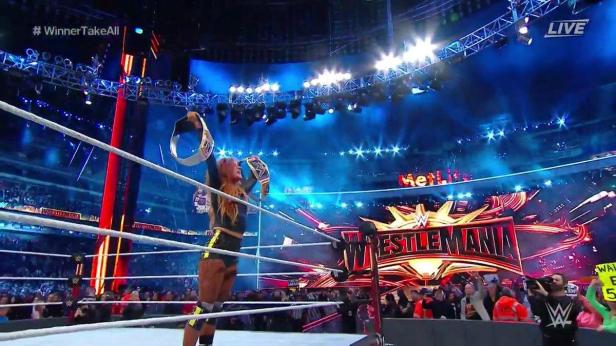 The build up to this match was epic. The day of Mania it was the first thing on everyone’s mind. The match itself delivered. It felt like a big deal. The entrances for all three contestants rivaled that of Triple H, The Rock, and Stone Cold. The match itself was chaotic, it was fast, it felt real. Ronda overly aggressive attacking both Charlotte and Becky. Becky picking her spots to attempt to win the match quickly. While Charlotte did what she does best. Cary the match on her back. There was very limited one on one action between Becky and Ronda. And to be fair when they were one on one it was rough. Becky was either to physically small for Ronda’s styles or Ronda was not smooth enough to chain wrestle with Becks. So Charlotte picked up the slack. Charlotte resoundly declared that she is not only the best wrestler in the women’s division, not just the best wrestler in WWE. I would say after last night the top three wrestlers in the world a Charlotte, Kenny Omega, and Kazuchika Okada. The Queen held that match together and was working at a non stop pace. Her ability to tell stories is second to none, and her willingness to work with any and everyone is rare. She is truly the crown jewel of the WWE, and one of the top three on the planet. With that being said the match delivered on everything but the screwy finish. The finish alone is not enough to taint the match. Hopefully they have plans to explain away the botch at the end of the match. However I fear this has already tainted Becky’s run as the undisputed Women’s Champion. 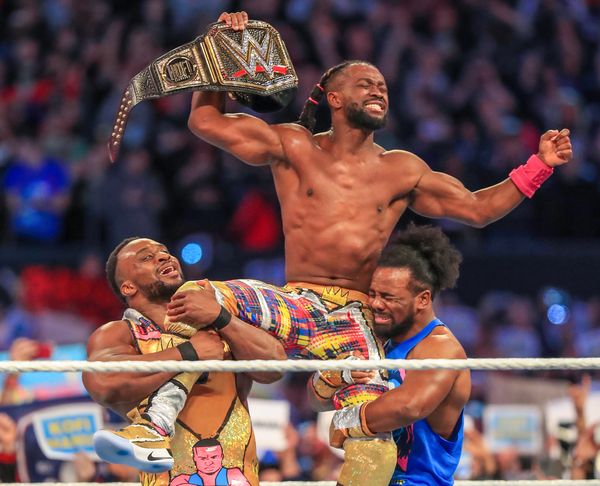 Daniel Bryan at WrestleMania thirty was a feel good moment. The deserving underdog triumphing over the company itself to become the champion. So when Daniel Bryan was playing the role of his once previous tormentors the irony was lost on no one. The match itself was sloppy, but this was never billed as a match of technical excellence. This was one was all about the feels and by god it delivered. For the majority of the match Daniel Bryan proved too much for the older statement of The New Day. That is until Daniel Bryan was delivering the world famous “It Kicks”. The momentum swung to Kofi as he embodied the immortal Hulk Hogan, hulking up and eventually turning the tide on the Planets Champion. My living room was so loud it felt like we were at Mania as Kofi delivered the Trouble In Paradise to get the pin fall. The scene after was something that will be played in WrestleMania packages till the end of time. Biggie and Xavier throwing away the economically suitable title for the true WWE Championship complete with Kofi side plates. Then in true New Day fashion they unveiled their new t-shirt. Showing a cartoon rendition of The New Day with the text reading “It’s a New Champ, yes It Is”. With the cherry on top as Kofi’s two sons climbed into the ring to celebrate with their dad.

I’m not crying you’re crying. What a moment.

So if numbers five and four had technical excellence, and number three had hype, and number two had the feels. Then number one should embody all of that right? 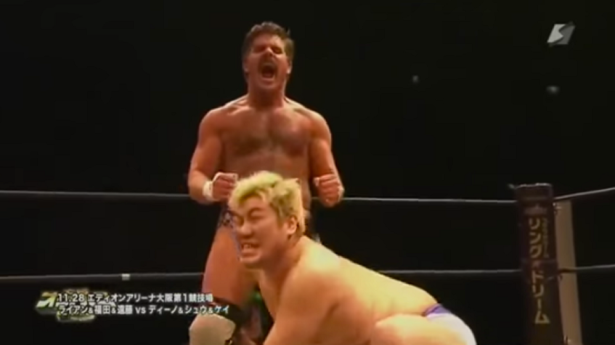 Kidding it could only be one match.

This match did not have the build up of the Women’s Title. However it was two of NXT’s top stars facing off for the vacant Championship. I think everyone in the building thought it could go either way. I think the building’s support was legitimately split fifty fifty. That allowed the atmosphere for this match to grow with pace. As the crowd swayed between the two fan favorites. The work rate rivaled that of a New Japan match. Slowly building to the break neck high spot pace finish. The storytelling was brilliant, and quite honestly something you would expect from two seasoned veterans of the indie scene. It wasn’t until this match fans realized how similar the base offence of Johnny and Cole were. Normally this would be a disadvantage as styles make fights. However Gargano and Cole used it as a way to explain how evenly matched they were. With both combatants landing and missing some of their signature spots. Showing their growing ability to read the others offensive attacks. Eventually Johnny Gargano got the final fall on Adam Cole winning the NXT Championship and becoming the first triple crown winner in NXT History. That was just the start of the feels. As Johnny celebrated we had all your classic moments. Mom and Dad in the crowd. Johnny celebrating amongst the crowd and of course with Mrs. Wrestling Candice LeRae at his side the entire time. The crowd never popped it just continued a steady roar for what felt like an hour. That is until Johnny walked up the ramp taking one last look at the crowd when Ciampa emerged behind him. Johnny playfully saying to the crowd, “he’s behind me isn’t he.” Ciampa grabbed Johnny and gave him a hug that we all wished would never end. There was not a dry eye in the WWE universe Friday night. Truly a great match from two of NXT’s best, and a moment that will define the career of Johnny Gargano.

Mania Weekend was full of amazing matches and selecting the top five was really hard. This was hands down the best Mania weekend in the past ten years. Maybe the best weekend of Wrestling in 2019. I guess we will have to wait to see what AEW has planned for us later this year to award a crown. However in the history books this will go down as one of the greatest weekends in wrestling history.