NXT started as a WWE Networks Show. Since its inception they were considered can’t miss events. Now the yellow brand has evolved into an Indie Wrestling All Star Roster and the best brand in wrestling. So on this the day of arguably the most stacked NXT show ever we want to take a look back at NXT’s best. If you like these categories make sure you check out next week’s Draft Day podcast. Where a group of Wrestling Super Nerd will fill out the same categories. Until then enjoy our NXT look back.

Sami Zayn was the original NXT Favorite. Crowds willed the under dog to countless victories with this sing song display of support. Eventually carrying him to an NXT Championship.

When NXT traveled to London for a TakeOver ever wrestling fan was on the edge of their seat. How would the crowd respond. Would England ruin our favorite American brand? What happened was an innovation as the British met every NXT superstar with a carefully crafted song. The greatest of this being Won’t you be my girl. “Heeeeeey hey Bayley, won’t you be my girl” echoed throughout the arena for the entirety of her match against Nia Jax. The chant was rarely used in the United States, but those of us who were watching live that afternoon can still hear it in our heads.

Johnny Gargano aka Johnny Wrestling. A nickname borrowed from Johnny Manziel but cemented by a true NXT Legend. Johnny has headlined more NXT TakeOvers than any other wrestler in NXT History. His work rate and match ratings are through the roof. So anytime the Indie Hero graces us with his presence the NXT faithful find it necessary to shower him in praise by chanting his iconic nickname.

My name is Enzo Amore. And I can’t spell! Enzo and Cas were never meant to be stars. If you need proof check out the astounding win loss record in NXT. However if there is one thing the NXT crowd loves above all else it’s to push who they want. With the debut of Enzo and Cas came one of the greatest entrances of all time. Bada Boom the realest guys in the room. We still miss you.

Sasha Banks walked the line between Face and Heel better than anyone. Because of this she garnered a mix reaction from the crowd. Some adored the take what I want attitude of the Boss. Others hated it. So to voice their displeasure they chanted “Sasha is ratchet”. And her supporters would come to her aid simply by saying, “no she’s not”. A call and answer chant that is only rivaled by “lets go Cena, Cena sucks”. Since her debut on the main roster the chant has faded. As Sasha has stayed mostly face. I hope sometime in the near future as the Boss stomps the back of her opponent’s head into the mat and we can hear the iconic chant reign down on her once again.

Aleister Black is possibly the most original character the WWE has ever had. He is directed by a moral code that is neither good nor evil. Simply what is right and what is fair. His look, his in ring style, and his approach to pro wrestling are uniquely his. So you need a theme song that can encapsulate that. CFO nailed it with Root of All Evil. “No man is ever truly good, no man is ever truly evil.” being screamed at a decibel and passion that makes it barely recognizable. That is the best introduction to WWE’s most original character.

If a wrestler is blessed with a theme song that involves fan interaction they are golden. Set for life even. To this day crowds chant YOU SUCK at the WWE Hall of Famer Kurt Angel. So when the former New Japan standout came to WWE he was given one of the most uniques entrances in all of WWE. In large part to fit his rock star like personality. What they maybe didn’t predict was the crowds ability to sing along with the catchy tune. During his baby face run in NXT it was haunting to hear thirty thousand strong humming along with the artist Shinsuke Nakamura.

It is hard to define who is the greatest NXT Superstar ever is. However if your went with a Mt. Rushmore of NXT this women would have to be on it. Sasha Banks ruled over Full Sail for years. No matter who she faced, or if she was good or bad the NXT Crowd reacted. Everything she is can be explained in here theme song. Her as a child dreaming of being a pro wrestler to her larger than life personality once she achieved it. Some wrestlers change songs between face and heel runs. However Sasha’s music perfectly walks that line with her. Playing up her smugness in her heel form, and giving her sympathy when she is a face. Truly a perfect song for one of NXT’s finest.

Introduced on Instagram by DIY this theme song took on a life of its own. Glorious was originally intended for Nakamura, luckily for us Shinsuke turned it down and it fell to the Glorious One Bobby Roode. His flowing robes and larger than life personality immediately elevated the veteran to Main Event status. A large part of that had to do with his iconing theme song. The song was so popular it reached the top ten download on iTunes.

When Finn Balor signed with WWE we knew it would be special. Catch Your Breath became the signal that one of NXT’s greatest was making an entrance. The ESPN behind the scenes documentary of NXT revealed a lot to us about the process in NXT. One of those ws just how perfectly planned out Finn Balor’s Demon Entrance is. Catch Your Breath has become synonymous with NXT emploring fans to throw their arms to the sky at the crescendo of the chorus. The image of Finn conduction the Balor Club will forever be ingrained in the minds of every wrestling fan.

WWE signed three of the biggest names in the British Wrestling scene at once. Pete Dunne, Tyler Bate and Trent Seven. We got a preview of what Pete Dunne and Tyler Bate were capable of in a two day tournament to crown the United Kingdom Champion. However what they did that night couldn’t hold a candle to their match in Chicago. British Strong Style was on true display as the real life best friends tore each other apart. Dunne playing the role of the malicious villain and Bate the sympathetic baby face. The two of them set a new bar for singles matches at TakeOvers.

The crowning of the new kings. DIY had fallen short before to the Top Guys. Until arguably the greatest Tag Team match since TLC happened. A two out of three falls match to decide once and for all who the Top Guys are. The match itself is a clinic in Tag Team wrestling. With DIY winning the Tag Titles after both Ciampa and Gargano applied their signature submissions. The pop was loud and lasted for what felt like hours. The duo would soon lose their titles setting up our 3rd greatest match in NXT history.

The first installation of a trilogy of iconic matches. The former Tag Team DIY was divided one fateful night in Chicago where Tommaso Ciampa turned on Johnny Gargano. The betrayal drove both characters for the better part of a year. Creating arguably NXT’s greatest rivalry. The match was the first and arguably the best. With call backs to Ciampa beating Johnny senseless with a crutch to Gargano using that very same crutch to defeat his once best friend.

Before the break up of DIY. Before the epic matches between Gargano and Ciampa. Before you saw matches where you could feel the animosity. There was this match. There was the Legit Boss vs The Hugger. The two of them tore the house down creating some of the most memorable moments in NXT history. It would one of Sasha’s final matches before her debut on the main roster. It also served as the passing of the torch to Bayley. NXT Brooklyn has become synonymous with the Yellow brand. A big reason why was this match.

The introduction of an icon and the farewell of one of NXT’s originals. The chant “Fight For Ever” may have not been started here, but it was made iconic in the WWE Landscape here. The match was a dream match to everyone who has ever watched an indie match. It was something no one knew they wanted until they had it. Now we compare everything to it. Hands down the greatest match NXT History. 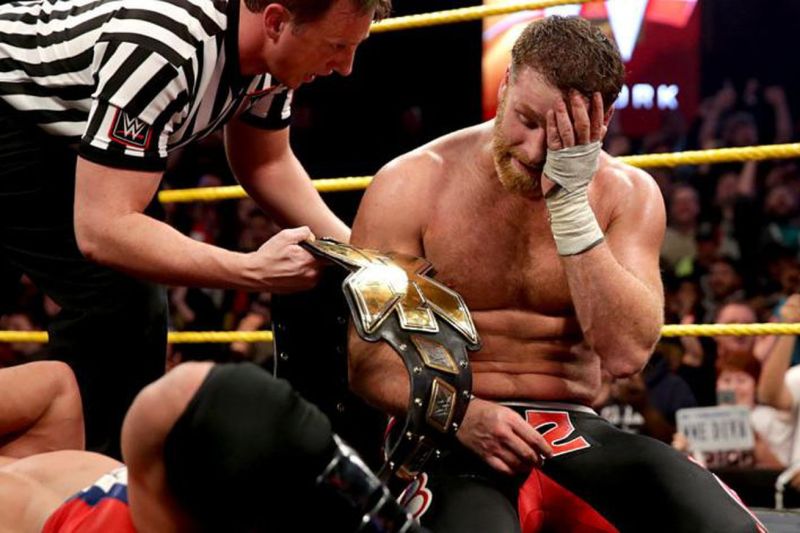 The Original favorite opens up our list. As time goes it gets harder and harder to keep Sami on this list. As NXT has become an All Star Roster of the best of the indies. But it’s still worth pointing out that the mold for bringing in hot indie starts started with NXT’s favorite underdog.

If the mold was created with Sami it was perfected with Johnny. Triple H singed Johnny at the peak of his indie career. However they signed him while he is still relatively young. Guys like Balor, Owen, and Zayn are in the twilight of their careers. Where as Johnny is just hitting his prime. This is now being replicated with signings like Adam Cole, Matt Riddle, and Candice Lerae. Johnny’s in ring work is some of the best NXT has to offer. Plus his eclectic vault of matches has something for everyone. One half of DIY for the tag team fans. A trilogy of brutal matches with Tomasa Champa. Great mixed tag wrestling with his wife Candice Lerae. And two wrestling clinics with Andrade. His versatility has endeared him to the NXT crowds and as he begins his ascension to the Main Roster he continues to leave NXT fans speechless with his never ending five star matches.

NXT’s Golden Era was defined by Finn Balor. It was ushered in when he singed with NXT. And it was over when he debuted on RAW. NXT sold out Barclays, traveled overseas, and announced that it was the greatest brand in wrestling. His time on the main roster has not been as lucrative. However Finn famously stated he never wanted to leave NXT and maybe management should have listened. Because when he was the face of the yellow brand there none better.

When NXT became a TV show it was pitched that we would get to see the beginning of talent. We would watch them grow from nameless face to full blown superstars. Bayley is the prime example of that. We watched her character develop right alongside her in ring work. We watched her form relationships and be betrayed by the people she called friend. She grew from a jobber into the face of NXT. Her journey inspired us all and for that she is our number 2 pick.

There is no arguing it. The Legit Boss is the number one NXT Superstar of all time. Much like Bayley we saw the evolution of the Legit Boss before our eyes. We originally hated her snotty personality, but before it was all over we praised her with chants of “you deserves it” after she defeated Charlotte for the NXT Women’s title. Every appearance from the Boss is crystal clear in our minds. As she blossomed before us to become the greatest NXT Superstar of All Time.