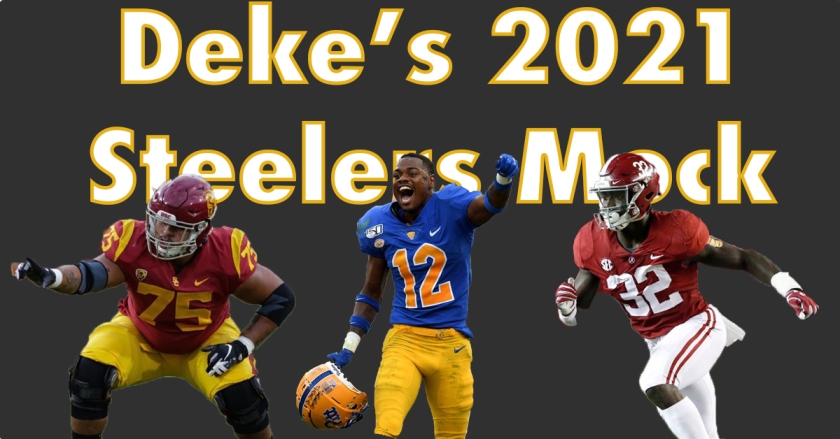 Man…how the hell is it a week from the NFL draft already? This entire year is somehow flying by but I’m fairly certain this next week is going to be the longest one of the year.

The NFL draft is magical. It’s an opportunity of hope for NFL franchises and fandoms that I think other sports just don’t do correctly. I full understand that saying that shows my American colors more than I traditionally enjoy when it comes to sports because of the way basically every other sport runs their entry level player introductions, but I love the NFL draft.

The Pittsburgh Steelers have sort of leaked that they are looking at 3 players with the 24th overall pick thanks to our friend Alex Kozora over at The Steelers Depot. Running Back Najee Harris, Offensive Tackle Teven Jenkins and Center Landon Dickerson. Fortunate for you, I am not the Pittsburgh Steelers.

For this Steelers mock I’m using the wonderful software over at The Draft Network. Keep in mind, you have a full week to give us your mock draft to be eligible to join in our Draft Show next week on Twitch! Winner will get something…something. We don’t know yet, but something!

There were a few directions to go here, but if AVT is there it’s hard to pass on him. Alijah is arguably the best interior lineman in this class and the Steelers just need talent on the line. I would have actually loved one of the “top” tackles here naturally but I’m a believer in the fear that comes with Dickerson’s injury history. Yes, cartwheels at the pro day did give me some hope but since I don’t believe AVT will be here on draft day it was too easy to just slide him into that line now.

Other players available here that I would take are Najee Harris and Travis Etienne at the RB position but without a line it’s tough to lean that way. I like guys like Leatherwood and Cosmi but in a deeper OL class I just want that talent right away.

Oh wow I didn’t really expect Williams to fall there so that’s kind of a no brainer. Honestly in most of my mocks I have been targeting OT or CB here, but Williams has some smoke for the first round and a lot of people have him as the top (not me) back on their board all together.

If Williams wasn’t there this pick would be a touch one between a few guys. I’m a big fan of this DB class and Asante Samuel Jr. is just starring me right in the face. I also love myself some Gregory Rousseau even with his year off from football. Pat Freiermuth would be another wonderful selection for the Steelers at this spot who’s available, but I just can’t pass on Williams here.

There are a ton of RB’s available with this pick but let the record show I would still run with Williams happily in the second. I was sort of hoping a random tackle fell to this position but I would argue corner is just as big of a need with the departure of Steve Nelson this offseason. Paulson is a solid corner who would be an instant upgrade on our regime.

Running backs like Michael Carter, Kenneth Gainwell and Trey Sermon are all here but none of them get me out of bed the same way Williams does. I’m actually a big Trey Smith fan for the interior of the line but with AVT as our first selection, I wanted to try to address the other needs. Also, the top QB is Trask and that’s just not happening.

Okay so this was really the first major decision I had to make. Moses is a freak athlete who needs a little work in the middle of the field but that’s nothing Devin Bush can’t assist with. Imagine having two absolute units at the LB position in our division. Spillane and Williams did a wonderful job filling in but when Bush went down our entire middle of the field was just wide open. Moses should offer us a MLB2 that can plug in instantly and keep up with today’s pace in the league.

I almost selected Robert Hainsey from Notre Dame here for a nice possible starter at tackle but I’m haunted of nightmares of our MLB core last season. Let’s hope we can try and snag a tackle at some other point in this draft because this one may come back to bite me.

Well shit all the tackles went so I went with the top center here in Dalman. He’s nothing flashy but what Dalman lacks in god given size he makes up for in technique. He was a senior at Stanford which doesn’t really fit the Steelers traditions at the draft but we need some talent at Center and despite not being a day one starter, Dalman has potential.

Patrick Jones II was someone I really liked if there wasn’t a possible center due to his production the last two seasons at Pitt. I know we drafted Highsmith last year but our edge rushers need a little TLC. James Wiggins was another player I thought about for a quick second just due to our lack of Safety depth, but neither guy hits what Dalman can give us.

I may be a homer but Ford was the guy I was hoping would be here with this selection. At this point of the draft the tackles are far from starters and I don’t want to snag a receiver just to do so, so let’s bulk up that Safety position. Ford is a promising talent who brings a nice mix of physical gifts with his exciting traits. He’s a tone setter who would be at the absolute least a package guy, something we need with the departure of Mike Hilton in Nickel. Not a replacement of course, but a bandaid.

I like Jonathon Cooper from Ohio State a lot here but our Safety depth is a massive issue heading into this season despite our starters performing well last season. Jaylon Moore and Carson Green are there at the tackle position but both guys would need a lot of time before touching the grass and that’s something we just can’t afford in Ben’s last year.

Surratt isn’t anywhere near a household name but the X receiver has terrific ball skills and a lot to learn. He is a contested winner when the balls in the air and a big body, something that the Steelers will be looking for to replace JuJu if a resign doesn’t come after next year. Honestly at this point in the draft you could go a trillion different ways, but I’m snagging a big body X receiver who doesn’t need to produce this year to prepare for the departure of Smith-Schuster.

This app doesn’t allow for Punters sadly otherwise I would send Berry packing. It’s nothing personal, we just need a better punter. K.J. Costello is also a pick that most people would select here but let’s see if he falls.

He fell! I am not saying that Costello is a starter or someone that we can pin a franchise on, but he does add significant pressure to a QB locker room that needs it. The Steelers just resigned Josh Dobbs to a contract so the Depth chart currently runs Ben, Mason, Dobbs then Haskins. Adding a 5th may not be the most logical move due to the roster problems we have but a 7th round flyer on a guy with a decent buzz about him shouldn’t be avoided because of need this late. I’m hoping that Haskins comes out as our next guy based off the college tape, but Costello will challenge for roles instantly due to the lack of talent on the depth chart.

No one else. Maybe a punter again, but I said I wanted Costello and he fell. Blinders on people.