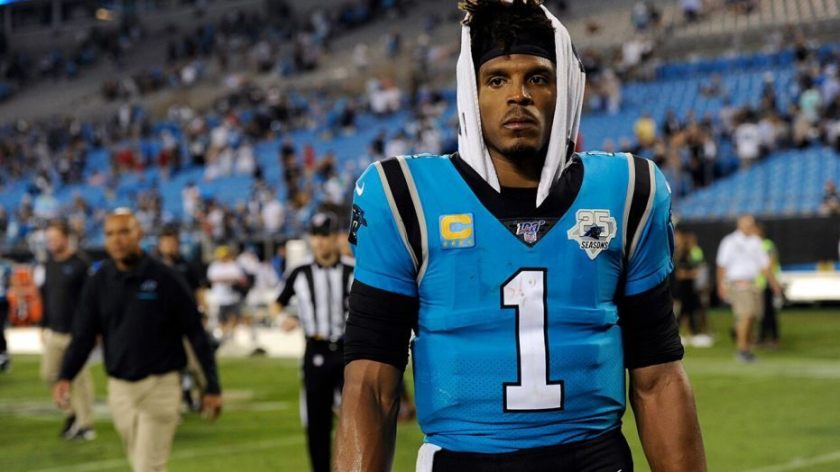 Cam Newton is set to be released today by the Carolina Panthers and there are a bunch of landing spots for him to go to. Today I will be ranking the top five teams that should sign Cam Newton. Now what I normally do in these rankings is what I believe each team should do. In this one, I am going off some basic needs, chemistry aspects and overall how these coaches think plus a little what I normally think to get to our top five. Here we go guys!

This one I decided to throw in just because I could see how fun it could be for Cam Newton in Miami. He would have a similar situation to veteran journeyman Ryan Fitzpatrick and at this point with Newton on your team, you wouldn’t have much use for Josh Rosen and you could decide what to do with Fitzpatrick after the draft. Cam could also learn a lot from Flores who in my mind is a football brain surgeon and can pick apart various things not many others could see. He also has a vast supply of trickery that could benefit Newton’s style of play. Now that my speech is over let’s get to number five on our list.

Look I know they signed Marcus Mariota as a backup here, but honestly Jon Gruden couldn’t pass up this opportunity right? It is no secret that the general manager Mike Mayock isn’t the biggest fan of Derek Carr and Gruden tries to support him as much as possible, but these two butt heads all the time, and you have to wonder with the signing of Marcus Mariota too. Are they trying to transition the quarterback play? Are they trying to boost ticket sales with a big name like Newton’s? Hey man I guess we’ll find out okay cause guess what? This Newton guy…he can really play some football man.

The Bronocs have made some decent moves in free agency already this year. John Elway is probably looking like we found our guy in Drew Lock, but they did release Joe Flacco and Cam Newton is on the board apparently now. There is no way Elway doesn’t take a chance here on Cam to bring him in as the veteran who can push Drew, or he simply just starts over Drew. I don’t like it, but it is hard to argue with Elway’s constant quarterback carousel in Denver.

You see where I’m going with this here so I am not gonna spend a lot of time on it, but Ron Rivera and Cam Newton have a specified relationship and chemistry that goes back to when they both were in Carolina. They even went to the Super Bowl against the Denver Broncos. Problem is they just sucked in that particular game. I think Cam and Rivera deserve one last shot together and this time it would be for the Washington Redskins.

In my own personal opinion, this should be number one, but I am going off of who he’d most likely sign with, not who I would sign him to. The Chargers have stated they were looking for mobility in their quarterback hence the signing of current starter Tyrod Taylor. They also have publicly stated they aren’t looking for a veteran quarterback…yeah okay look when Cam Newton goes up for grabs, you don’t second guess it. If he fits what you are looking for jump on it. Get to it Anthony Lynn. You already shattered my dream of Brady on this team. Don’t screw this one up.

I hate putting this up here, but there is no doubt that Cam Newton will make a run to be the new quarterback of the New England Patriots. Belichick always does this. He takes veterans that were cut and thrown away and turns them into legends once again on the field. He is also credited for saying that Cam Newton is “Public Enemy Number One”. That tells you alone he thinks he has the talent. So why not put him as the quarterback that can hopefully rebuild the Patriots dynasty before it even crumbles.