It’s no secret that NBA is absolutely packed with talent, and young talent at that.  I feel that this league has a very bright future with all the potential I see in these young balla shot callas know what I mean son?  ESPN recently made a list of their top 25 under 25, but I want to narrow that list to an elite top 10 of guys who I truly believe are the future of basketball.  The criteria is they must actively be an NBA athlete, under the age of 25 and in my eyes, have a lot of peak time left.

#10- Kristaps Porzingis (DAL): The unicorn’s injury issues are the only reason he is in my last spot.  His talent though is undeniably that of a freak of nature.  This 7’3 Latvian lanky son of a bitch can do it all at a freakish height.  He went from being boo’d at the draft and being called “Tingus Pingus” to one of the most popular guys in the sport.  He can actually ball handle pretty well, elevate on dunks, and shoot almost smoother than vintage Dirk Nowitski.  Now that he is in a system such as Dallas, I think he will flourish there if he can stay healthy.  Anyone who watched him play in New York, knows he deserves a spot here.

#9- De’Aaron Fox (SAC): “Swipa” I think is probably the most underrated player under 25.  This kid was a freshman star at one of the most prolific college basketball programs in the country, Kentucky.  Being drafted to a team like the Sacramento Kings, it’s hard to expect success.  Fox currently has this team as a playoff contender right now.  With other good players around him like Buddy Hield, Marvin Bagley and others, Fox is grooming himself into an elite point guard.  He can dunk, shoot, has GREAT handles, and to me is top 3 fastest players with the ball in the entire league.  Honestly was tempted to put him higher on this list.

#8- Kyle Kuzma (LAL): Kuz is easily the best young talent the Lakers have had in a very long time.  His build along with his strength, and shooting ability is unmatched by most young players.  Kuz can back someone down in the post, or spin and hit a fader.  Paired with fellow up and comer Lonzo Ball with the company of LeBron James, it’s hard for Kuz to get his well deserved recognition, but believe me, this kid is the truth.

#7- Devin Booker (PHX):  My heart breaks for this kid seeing him have to play on statistically the worst team in the NBA right now in Phoenix.  Despite his baby mama drama with having two babies to two women at the same time, dude is solid.  He isn’t a high flying physical player, but he is fast, has handles and a shot smoother than a glass of chocolate milk.  This kid is built of pure finesse.  Watching him play is so fluent.  Almost no errors, just looks like he is 100% comfortable out there.  This was a man who was a 6th man at Kentucky, and shined when he came in the league.  His talents are being wasted by the Suns, so hopefully he can showcase his abilities somewhere else soon.

#6- Karl-Anthony Towns (MIN):  KAT is a monster.  We know this.  He reminds me of classic big men, but has a shot on him too.  He played at Kentucky with the previous member on our list Devin Booker. KAT is a former rookie of the year, and to this day is the leader on the Timberwolves.  He scores more than anyone on that team, and is a lockdown defender down low.  He is one of few big guys that still are exciting to watch.  If Towns can recruit some more talent there, they could be deadly.  KAT’s shot and dunking aggressiveness is enough to land him a spot on my list. 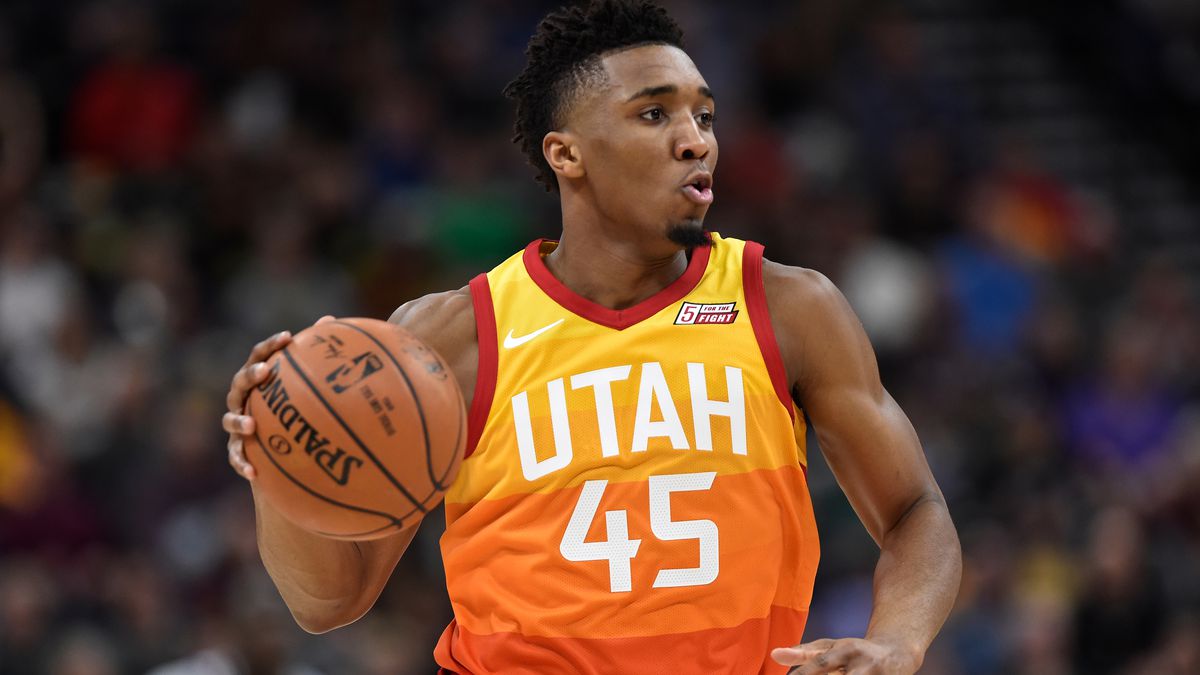 #5- Donovan Mitchell (UTA): “Spida” came underrated out of Louisville.  He hit Utah like a damn storm. He is the classic athletic shooting guard that shows shades of Kobe and Ray Allen to me.  He also is responsible for turning the Jazz around for the first time since the Carlos Boozer and Deron Williams prime days.  He also has posterized twice his size and is a clutch scorer.  He can do it all.  Shoot, dribble, cut, and obviously dunk sometimes beyond our comprehension.  He is also one of the most determined and focused athletes I’ve ever seen.  Mitchell is LETHAL.

#4- Jayson Tatum (BOS):  Tatum is the complete package.  He is a 6’8 small forward who honestly is a stretch-five.  He has handles and great fundamentals with that.  He can shoot, is powerful when driving to the rim, and can sink a shot from almost anywhere on the court.  He is also an excellent defender and has already halted players like LeBron and Giannis in the past.  To me with all the Kyrie drama, he is the most important athlete that franchise has had in decades.  He shows many shades of young Kevin Durant.  And if that continues… watch out.

#3- Joel Embiid (PHI):  You either love him, or hate him.  Either way you can’t deny that Embiid is today’s truest representation of a big man.  When healthy, he is absolutely dominant and puts between 20-30 points up consistently and should have a goddamn squeegee for how much he cleans the backboard for rebounds.  His personality is more easy to notice but he is so freaking talented.  He is one of if not the scariest defenders  to go up against down low and his put back dunks will frighten the toughest of centers.  This guy is dominant and has the capability of carrying on the legacy of big men from the 90’s.

#2- Luka Doncic (DAL): Is this biased?  Maybe a little, but this kid is the most electrifying player to watch in the LEAGUE today hands down.  He is 19, and has made 10+ year veterans look silly out there.  He can dunk, cross up the meanest of defenders, and shoot no matter who covers him.  His shooting form makes him seem longer than he actually is, and can score from any position.  He has hot shots behind the backboard, off balance, triple covered, falling down, and waaaaaay out deep.  LeBron listed this kid as someone he’d love to play with.  Averaging 22+ points on a team like the Mavericks is impressive.  He is THE future.  Mark my words, he is a future MVP.

#1- Giannis Antetokounmpo (MIL):  Was this even a question?  The Greek Freak is a magical being.  He has convinced me that there are specific Basketball Gods.  They crafted him as a gift to the game.  Obviously I admire the guy’s loyalty and charisma, but he is a top 5 talent in the whole league and a strong leading candidate for MVP this year.  Giannis crashing the lane towards anyone is scary.  He is ferocious and vicious.  He leaves no prisoners, only victims.  His dunking, shooting defense, break away speed and stamina is hall of fame worthy.  Nobody expected this guy to be so dominant, but dude is an animal and will win a championship within 5 years max.  Easily my number 1 spot on this difficult list.

There is too many good young players nowadays.  This was my toughest list yet.  Needless to say, our league is in good hands.  I am VERY excited for the future, and you should be too.