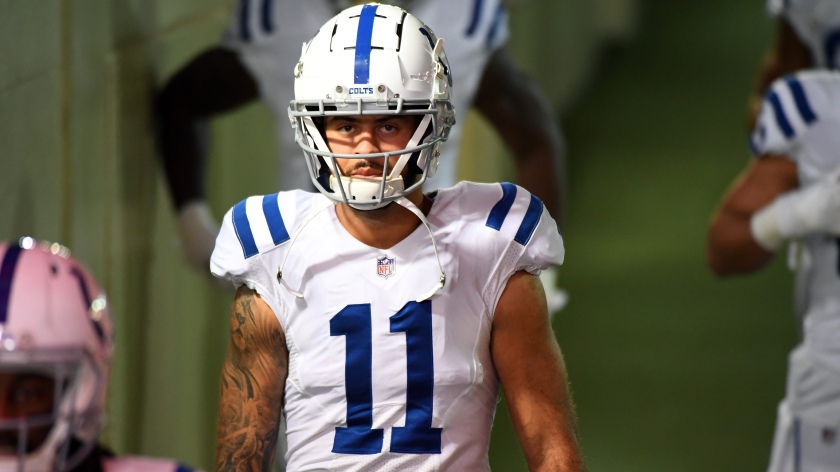 Last week is starting to look terrible in terms of my outlook for fantasy as Mike Williams was my start of the week, and DeVonta Smith was my sit. Both performed in the opposite way I thought they would which always makes me a little green around the gills. Let’s hope this week will be a little bit better.

I know it might be risky putting Pittman as the start of the week against Buffalo, but I am willing to take a chance here. Pittman has put up big numbers against defenses that are hard against wideouts in the past, and I am willing to bet he makes a stand here against the number one defense; Buffalo. Taylor should take some slack off of Wentz and the offense so they won’t have to throw as much, but when Wentz does throw it will be to Pittman.

Moore has been slipping since the beginning of the season, and that is likely in part due to the inconsistency of the quarterback throwing him the ball. However, this week he will have Cam Newton under center. He will also be up against a defense that is ranked second to last in terms of defending wideouts. Moore should definitely bounce back here for fantasy owners everywhere.

The Bengals are coming off a bye week, and now they will go up against the Las Vegas Raiders. The receivers should do well in this one particularly Tee Higgins. He has scored double-digit points in every game except one he has played in. I know the Raiders are listed as 6th in terms of defending wideouts, but their defense has been slipping and they have let go of Arnette which limits their secondary. Higgins should do just fine in this one.

On the other side of the game, we have the Raiders. Since the loss of Ruggs in the offense, Renfrow has 100% stepped up as the number one wideout. In all the games he has played this season, Hunter has scored double-digit points in every single game except one. Since Ruggs has exited, Renfrow has had two games in which he has scored almost 18 points back-to-back. He will face off against the Bengals’ defense which is ranked 22nd against wideouts. Start him.

Elijah Moore has been on fire ultimately becoming the number one guy for the Jets as a rookie. Since the Jets’ bye week he has scored double-digit points every week. He has also scored three touchdowns in that time frame. I like him to be the guy to succeed this week when the Jets take on the Dolphins who are ranked 30th against wideouts. Flacco should also be the quarterback so expect him to sling it.

I really thought that when the 49ers would start playing bad teams against the pass that Aiyuk would start coming out of his shell. Sadly, that just hasn’t been happening this season with Aiyuk having a total of two touchdowns on the season and just three games with double-digit points. He has lost the number one role to Deebo Samuel, and George Kittle gets more targets than him as well. The matchup is a good one, but I can’t have you start him the way he has been playing.

Robinson had his best game of the season two weeks ago against the Steelers. While I like this matchup against the Ravens, I am still a little skittish about putting Robinson in the lineup. I would say if you have to play him that he is no more than a risky flex play. Hopefully, Justin Fields can get him more involved with the lineup, but also a questionable tag makes me a little scared which is why I am also avoiding him this week.

Williams has been sliding down as of late which sucks because he started off so hot off the tracks. The game plan has been giving him the ball less and less as of late which puzzles me a little bit. Now he faces the Pittsburgh Steelers who on paper are not good against wide receivers. However, they always bounce back after playing bad games and target the players who do well. I imagine that they will target Williams here and will cause him to have another slump of a week.

So Landry was a bad play last weekend, so I’ll roll with the numbers here and sit him this week against the Detroit Lions. I firmly believe that the Browns will implement their run-first attack with Nick Chubb coming back and with Baker Mayfield injured to shit. The Browns receiving core should not be looked at in this one including Landry which calls for a sit this week.

Green is going to be an interesting play this week because Murry and Hopkins could play which would defer his points, but you also have Christian Kirk who has been doing good well. Not to mention James Conner has been catching passes out of the backfield as well. Green could be a nice play this weekend, but honestly, with all these things coming into play, I would just avoid it together.